US Can Destroy Drones Flying Near Military Bases

Update Required To play the media you will need to either update your browser to a recent version or update your Flash plugin.
By Dan Friedell
08 August, 2017

People who live near American military bases and like to use drones, should be careful. Their flying toy might become a target.

A drone is a flying machine operated by a device on the ground. 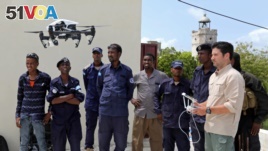 On Monday, the U.S. military announced new guidelines about how it may deal with private drones. Navy officer Jeff Davis is a spokesman for the United States Defense Department. He said that civilian drones in the sky could be at risk of capture or destruction.

Captain Davis said the U.S. government is concerned about the safety of military sites, airplanes and people. So, he said, it is closely watching drones.

The Federal Aviation Administration estimated the number of private business drones alone could increase 10 times by 2021. In late 2016, the agency estimated there were 42,000 drones being used by businesses.

The government has announced a plan to deal with drones. It took months to negotiate. Many details are still secret about terms for capturing or destroying private drones. It is not even clear how far drones must stay from military sites to avoid being targeted.

Action against drones does not have to involve firepower. The news website CNN said the U.S. Department of Defense has developed systems for bringing down drones using radio waves. The report said such systems are already in use in Syria, Iraq and other places.

The drone story led to a mixed reaction on Twitter. Several tweets suggested the military's announcement about possible downings of drones was not news. Seany Hide tweeted, "Of course they can."

Others wondered why homeowners cannot take similar action. Twitter user Mark Bradford said people should be able to shoot down drones flying over their property.

On Tuesday, U.S. defense officials said an Iranian drone interfered with an American fighter jet in the Persian Gulf. The drone was being controlled by people on an Iranian boat. The officials said airplanes have avoided hitting drones 12 other times this year.

Dan Friedell wrote this story for VOA Learning English based on reports by Reuters and CNN.com. Caty Weaver was the editor.

What do you think of the drone rules? We want to know. Write to us in the Comments Section or on 51VOA.COM.

site – n. the place where something (such as a building) is, was, or will be located