Update Required To play the media you will need to either update your browser to a recent version or update your Flash plugin.
By Mario Ritter Jr.
21 April 2020


With millions of people out of work, several nations are planning to ease anti-coronavirus restrictions on businesses and other activities.

The push to reopen has brought warnings from health officials. They say relaxing the stay-at-home restrictions too quickly could bring the virus back. 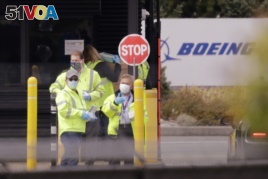 Workers wearing protective masks stand at an entrance to a Boeing production plant to hand out masks to other workers entering Tuesday, April 21, 2020, in Everett, Wash. (AP Photo/Elaine Thompson)

Spain will begin permitting children out of their homes for short periods next Monday. Denmark announced plans to reopen Tivoli Gardens, the famous amusement park in Copenhagen in May.

In Austria, Chancellor Sebastian Kurz said all shops will reopen at the beginning of May and restaurants in mid-May. He said the government will study the situation every two weeks and added he will "pull the emergency brake if that is necessary."

Meanwhile, some state governors are planning similar easing measures in the United States. Georgia, South Carolina, Tennessee, West Virginia and Colorado, announced plans to slowly reopen in the coming days. Boeing is among the large industrial manufacturers that will start production across the country.

New York City Mayor Bill de Blasio warned, "If some of these re-openings are done the wrong way, it's going to affect all of us."

The moves to reopen for business come as unemployment has sharply increased. And the International Monetary Fund has warned the outbreak could lead to the developed world's worst economic depression since the 1930s.

On Tuesday, financial markets in Asia and Europe followed American stocks lower after U.S. oil contracts lost all their value. Far too much oil is now on the market because of a lack of demand as factories, cars and airplanes are not being used.

However, the true number of infections around the world is believed to be much higher. That is because of limited testing, difficulties in counting the dead and efforts by some governments to hide the extent of their outbreaks.

Officials at the United Nations have called for efforts to ensure that all people can be tested for the new coronavirus. They also are urging that medical supplies, drugs and future vaccines be made available, especially in developing countries.

African officials have strongly noted the need for medical supplies across the continent. Experts worry that Africa's health care systems are weak and could become overwhelmed.

A report from the U.N. Economic Commission for Africa said that Africa will need $44 billion for testing, personal protective equipment and treatment. But the report estimates that ten times that much could be needed in the worst case.

Will life return to normal?

But in a sign that it will be some time before life returns to normal, Spain canceled its Running of the Bulls in Pamplona. The more than 400-year-old event was made famous by Ernest Hemingway's 1926 novel "The Sun Also Rises."

And the U.S. canceled the popular Scripps National Spelling Bee. The competition has been held since 1925. It was only stopped once before — in 1943-1945, because of World War II.

Cara Anna, Elena Becatoros and Jan Olsen reported this story for the Associated Press. Mario Ritter Jr. adapted it for VOA Learning English. Hai Do was the editor.

brake –n. a device that slows or stops a vehicle