Update Required To play the media you will need to either update your browser to a recent version or update your Flash plugin.
By Mario Ritter Jr.
27 December 2021

Tutu's legacy of activism for equality continues to influence young South Africans, many of whom were not born when the clergyman battled apartheid. Apartheid was a governing system that kept whites and blacks separate and guaranteed controlling power for the white minority in South Africa.

Tutu received the Nobel Peace Prize in 1984 for his efforts to gain full rights for South Africa's Black majority. South Africa is holding a week of mourning for the retired leader of the Anglican Church of Southern Africa. 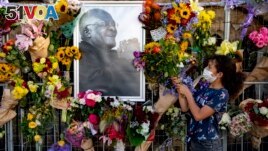 Flowers are placed on a fence surround a portrait of former Anglican Archbishop Desmond Tutu outside St. George's Cathedral in Cape Town, South Africa, Dec. 27, 2021. At midday bells are rung to honor Tutu, a day after his death. (AP Photo)

Following the end of apartheid in 1994, Tutu chaired the Truth and Reconciliation Commission. It documented the bad treatment Black people experienced during apartheid. It also sought to support national reconciliation. Tutu also became one of the world's most well-known religious leaders to champion LGBTQ rights.

Some young South Africans spoke to The Associated Press on Monday. They said, although they did not know much about him, they thought Tutu was important in the country's efforts for democracy.

Sixteen-year-old Zinhle Gamede said she found out on social media out that Tutu had died. She learned much more about him over the following 24 hours.

"I found (out) about his death yesterday on TV and on Facebook. People were saying that he is one of the people that fought for our freedom," she said.

"Today I am living my life freely, unlike in the olden days (when) there was no freedom."

Twenty-five-year-old Lesley Morake said he knew about Tutu through the clergyman's strong support for LGBTQ rights.

"As a gay person, it is rare to hear people from the church speaking openly about gay issues, but I found out about him through gay activists who sometimes use his quotes during campaigns," Morake said. "That is how I knew about him, and that is what I will remember about him."

Tshepo Nkatlo said he is paying attention to the good things he is hearing about Tutu. He said he found out that on social media some people criticized Tutu for not seeking to punish whites during the years of the Truth and Reconciliation commission.

"But mostly I have been hearing positive things about him," said Nkatlo.

Bells rang at midday Monday from St. George's Anglican Cathedral in Cape Town to honor Tutu. The bells at "the people's cathedral" where Tutu worked to unite South Africans of all races against apartheid, are to ring for 10 minutes at noon for five days to mark Tutu's life.

"We ask all who hear the bells to pause their busy schedules for a moment in tribute to Archbishop Tutu," said the current Archbishop of Cape Town Thabo Makgoba.

Several services in South Africa are being planned to honor Tutu's life, as messages honoring him came in from around the world.

Tutu's body will lie in state at the cathedral in Cape Town on Friday. This will permit the public to see "the simplicity with which he asked to be buried," said Makgoba in a statement.

A special service will be held Saturday. Tutu's ashes will be placed in the cathedral's burial area, church officials said Monday.

In addition, a mixed religious service will be held for Tutu on Thursday in South Africa's capital, Pretoria.

South Africans are placing flowers at the cathedral, in front of Tutu's home in Cape Town's Milnerton area, and in front of his former home in Soweto.

"He knew that apartheid would end, that democracy would come," South African President Cyril Ramaphosa said of Tutu, in a nationally broadcast speech Sunday night.

"He knew that our people would be free," the president said. He added that South Africa's flags will be flown at half-staff this week.

Ramaphosa urged all South Africans to "pay respects to the departed and to celebrate life with...the purpose of our beloved Archbishop. May we follow in his footsteps."

Mogomotsi Magome and Andrew Meldrum reported this story for the Associated Press. Mario Ritter Jr. adapted it for VOA Learning English. Caty Weaver was the editor.

legacy –n. something that is received or handed down from someone who has died

reconciliation –n. the act of causing two people or groups to become friendly again after an argument or disagreement

pause –v. to stop for a period of time

tribute –n. something that you say, give, or do to show respect for someone

schedule –n. a plan of things that need to be done and the times they will be done