Update Required To play the media you will need to either update your browser to a recent version or update your Flash plugin.
By Bryan Lynn
27 December 2021


When corals are mentioned, many people think of rock-life forms in the sea filled with colorful fish. But corals are made up of hundreds of thousands of small organisms which live and feed like any other sea life.

For the past five years, researchers in Hawaii and Australia have been engineering corals inside a lab to see if they could better resist the effects of climate change.

They say it is now time to see how their creations perform in nature. 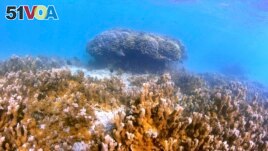 The scientists say climate change linked to human causes has led to warming oceans that can harm sea life. They say if the more heat-resistant corals they developed do well in the ocean, the method can be used to help save suffering and dying reefs.

The team tested three methods for making corals that would be strong and healthy in nature.

A second method subjected the corals to increasing temperatures to condition them to be able to survive in warm ocean environments. The third involved making changes to the algae that provide corals with necessary nutrients.

The leader of the project, University of Hawaii researcher Kira Hughes, said all the methods proved successful in the lab.

She told The Associated Press that some scientists might worry that such methods go against the natural processes of nature. But with the planet continuing to warm more and more, she does not see any better options.

"We have to intervene in order to make a change for coral reefs to survive into the future," Hughes said.

When ocean temperatures rise, corals release algae that supplies nutrients and gives them color. This causes them to turn white, a process called bleaching. When this happens, corals can quickly become sick and die.

But for years, scientists have been observing corals that have survived bleaching, even when others have died on the same reef. They are now centering on those healthy survivors and hoping to further increase their resistance to heat. Those corals were used as the parents for the newly created kinds.

A recent study from the National Oceanic and Atmospheric Administration and other research organizations took a close look at bleaching events. It found them to be the biggest current threat to the world's coral reefs. Scientists found that between 2009 and 2018, the world lost about 14 percent of its corals.

"Corals are threatened worldwide by a lot of stressors, but increasing temperatures are probably the most severe," said Crawford Drury. He is the chief scientist at Hawaii's Coral Resilience Lab.

Madeleine van Oppen is a research scientist with the Australian Institute of Marine Science. She told the AP there were concerns about whether the experiments could result in a loss of genetic diversity. And there were critics who said the scientists were "playing god" by making such changes to the reef.

"Well, you know, (humans) have already intervened with the reef for very long periods of time," van Oppen said. "All we're trying to do is to repair the damage."

Rather than editing genes or creating anything unnatural, the researchers are just attempting to begin what could already happen in the ocean, van Oppen added. In this way, she said, the team can center on a small area to keep and "enhance" what is already there.

The Associated Press reported this story. Bryan Lynn adapted the report for VOA Learning English. Hai Do was the editor.

reef – n. a chain of rocks or coral or a ridge of sand at or near the surface of water

characteristic – n. a typical quality that makes one person or thing different from others

algae – n. usually small plants that grow in or near water and do not have typical leaves of roots

enhance – v. to improve the quality, amount or strength of something