Update Required To play the media you will need to either update your browser to a recent version or update your Flash plugin.
By Jonathan Evans
19 December 2021


Students at St. Stanislaus High School in Mississippi are among the volunteers along U.S. coasts raising oysters to help restore, or repair, weakened reefs.

Oyster reefs are an important part of coastal environments. Each oyster filters, or cleans, 95 to 190 liters of water a day. Young oysters attach themselves to larger oysters and grow. The reefs provide living space for shrimp, crabs and fish. They also protect coastlines.

In the states of Maryland, Virginia, Mississippi, and Alabama, there are more than 1,000 oyster gardens. Most of them are in wire cages hanging from private ports. 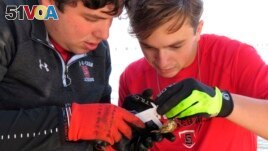 Colin Wood is one of two students looking after the St. Stanislaus garden. He collects data and supervises other students. He said he was excited by the hands-on work he gets to do. "I didn't realize oysters had a big impact on the environment," he said.

Dennis Hatfield grows oysters on Little Lagoon in Gulf Shores, Alabama. He said he is surprised each summer by the number of crabs, fish, shrimp and other animals he clears from his cages.

In the 1950s, an average of 37,400 tons of oysters were taken yearly from partly salty waters in the U.S. But U.S. oyster harvests fell sharply in the 1990s. Federal data showed the cause of the drop to be overharvesting, pollution, pests and other problems.

Commercial farmers around the country grow oysters near the surface of water. Oysters develop much faster where the water holds more of the plankton they eat and predators can be more easily removed.

Oyster gardening uses many of the same methods as farming. But the oysters are not being grown to be eaten.

Oyster gardens get pulled from the water every seven to 10 days. The time out of the water is used to clear out small animals, keep oysters from growing through the wires, and dry and clean off plant-life growing on the wires.

Bob Stokes is director of the Galveston Bay Foundation in Texas. He said oyster gardening is as much about education as it is restoration.

The Chesapeake Bay oysters faced many problems, including two deadly diseases. Chris Moore is a scientist with the Chesapeake Bay Foundation. He said decreases in oyster numbers in the second half of the 1900s followed a more severe decrease in the 1920s from widespread overharvesting.

Gardeners in the foundation and its member groups have added at least 15 million oysters in Maryland and 1 million in Virginia, Moore said.

Another group called the Chesapeake Oyster Alliance has set a goal of adding 10 billion oysters by 2025.

Janet McConnaughey reported on this story for the Associated Press. Jonathan Evans adapted this story for Learning English. Ashley Thompson was the editor.

reef – n. a chain of rocks or coral or a ridge of sand at or near the surface of water

filter – v. to pass something, such as a gas or liquid, through a filter to remove something unwanted

predator – n. an animal that lives mostly by killing and eating other animals