Update Required To play the media you will need to either update your browser to a recent version or update your Flash plugin.
By Bryan Lynn
05 September, 2018

The farm produces fruits and vegetables hydroponically, which means the plants do not grow in the ground. Instead, they grow on vertical equipment that provides a continuous flow of water. Indoor farms use artificial light instead of sunlight.

There are other vertical smart farms in South Korea. But this one – built by the company NextOn about 200 kilometers south of Seoul - is the nation's biggest. It is also one of the largest indoor vertical farms in the world, with a total area of 2,300 square meters.

But what makes the farm even more unusual is the fact that it sits inside a huge tunnel. The tunnel was built in 1970 for one of South Korea's first major highways, but it closed down in 2002. NextOn signed an agreement with the government last year to take over the tunnel and turn it into a high-tech farm.

NextOn officials say the tunnel environment permits ideal conditions for an indoor farm. It keeps a steady temperature of between 10 and 22 degrees Celsius. The tunnel is also completely dark, making it easier to provide exactly the right amount of artificial light. 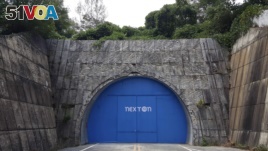 In this Aug. 9, 2018 photo, a set of bright blue doors covers the entrance of the tunnel that holds the farm NextOn in Okcheon, South Korea.(AP Photo/Han Myung Oh)

The farming system can produce more than 60 different kinds of fruits and vegetables. The company said foods produced in the indoor farm are also healthier since harmful chemicals are not necessary to prevent large insect invasions.

In South Korea, indoor vertical farming is seen as a possible solution to crop damage related to extreme weather that could get worse due to climate change. The country's farming industry has also been hurt by shortages of land and workers.

South Korea's Agriculture Ministry announced earlier this year it plans to invest in smart farm development nationwide. Those plans call for nearly doubling the current area for such farms.

Farming experts say high-tech farms, also used in Dubai and Israel, could be a good way to deal with problems many countries are facing with weather, decreasing farmland and fewer agricultural workers.

It can be difficult, though, for smart farmers to make a profit because of the high cost of building and operating. But NextOn said it cut its building costs in half by using the former tunnel and developing its own lighting and water systems.

These technologies reduced water and energy use and the need for workers. Sensors also measure things such as temperature, humidity, light and air quality. NextOn says the crops will cost less than other organic vegetables grown today.

Operators of the farm say they even provide music for the plants, since the tunnel blocks out any real sounds of nature. "We are playing classical music because vegetables also love listening to music like we do," said the NextOn's chief, Choi Jae Bin.

The company says it plans to expand its farm inside the tunnel in the near future to begin growing even more kinds of fruits, as well as plants used for medicinal purposes.

Bryan Lynn wrote this story for VOA Learning English, based on a report by the Associated Press. Hai Do was the editor.

tunnel – n. long passage that runs underground or through a mountain

vertical – adj. pointing straight up from a surface

artificial – adj. not natural, but made by people

highway – n. a main road, especially between towns or cities

humidity – n. measurement of how much water is in the air