Update Required To play the media you will need to either update your browser to a recent version or update your Flash plugin.
By VOA
12 November, 2015


Many critics consider "Skyfall" the greatest of James Bond films.

But, the latest in the series, "Spectre," may be a strong competitor for that title.

"Spectre" steps into new territory, and critics are giving it high praise. 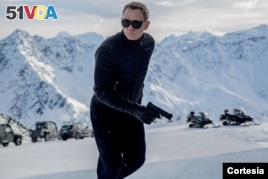 Daniel Craig stars in 'Spectre' the latest in the James Bond movies.

The latest story finds Bond on a personal journey to find an enemy from his past. He lost much that was important to him in "Skyfall" including the spy agency director, "M," whom he revered.

Bond travels from Mexico City to Rome, to the mountaintops of Austria, to the desert near Tangier and, finally, back to London. Bond is seeking archenemy Franz Oberhauser, played by Christoph Waltz.

Oberhauser leads an international terrorist group called Spectre. The group, it turns out, is responsible for much of Bond's personal tragedy beginning with the 2006 film "Casino Royale."

The plots of "Casino Royale," "Quantum of Solace" and "Skyfall" come to completion in "Spectre." A new era of Bond is born as a result. The character falls in love and is willing to honor love over mission. This softer side of Bond, alone, helps make "Spectre" interesting.

Director Mendes references Bond movies of the past in "Spectre." For example, a familiar white cat makes a brief appearance. The animal character was first seen in the 1963 Bond film "From Russia With Love." The beautiful cat belonged to the evil Ernst Stavro Blofeld.

Another connection: The final battle in "Spectre" takes place where it all started, at the damaged MI6 building that was bombed in "Skyfall."

"Spectre" earned about $70 million in U.S. ticket sales its opening weekend. It has sold about $300 million worth of tickets around the world. It is not quite as high as "Skyfall" earnings after the same amount of time. But it is closer than any other movie in the series.

Lucija Millonig wrote this story for Learning English. Caty Weaver was the editor.

era – n. a period of time that is associated with a particular quality, event, person, etc.