Update Required To play the media you will need to either update your browser to a recent version or update your Flash plugin.
By Hai Do
15 November 2021


Scientists have long said getting a good night's sleep is important to your health. The U.S. National Institute of Health says lack of sleep may even increase the risk of impaired brain activity, or cognitive decline, and Alzheimer's disease.

Now, an American team of scientists reports that too much sleep might be similarly linked to such conditions.

Researchers at Washington University School of Medicine in St. Louis, Missouri, did the sleep study. Their findings were published in the September issue of the scientific publication Brain. 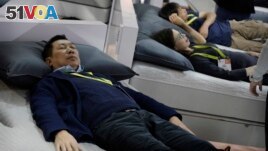 FILE - People try out smart beds during CES International, Saturday, Jan. 7, 2017, in Las Vegas. The bed has sensors that adjust the comfort and firmness depending on the user's position. It also warms the foot area prior to bedtime and it can sense snori

The study examined 100 adults who had been under medical observation for cognitive ability, the ability to think, for an average of 4.5 years. The average age of the study subject was 75. Eighty-eight of the group had been identified as free of cognitive impairment, or damage. Eleven subjects were judged very mildly impaired, and one was identified as mildly impaired.

During the study, they were asked to complete several tests for signs of cognitive decline. The tests are combined into a cognitive score – the higher the score, the better. They also wore electroencephalography (EEG) devices for four to six nights to measure their brain activity during sleep.

Overall, cognitive scores declined for those who slept less than 4.5 hours or more than 6.5 hours per night — as measured by EEG. But the scores stayed the same for those in the middle of the range.

Dr. Brendan Lucey is director of the Washington University Sleep Medicine Center and led the research. He said, "Our study suggests that there is a middle range, or ‘sweet spot,' for total sleep time" for best cognitive performance.

Greg Elder is a sleep researcher at Northumbria University in New Castle, Britain. He was surprised about the findings that sleeping longer than 6.5 hours was linked with cognitive decline. He wrote in The Conversation, "this is low when we consider that older adults are recommended to get between seven and eight hours of sleep every night."

Elder also noted that the research did not consider other information about the individuals studied, including their general health or economic conditions.

Other studies have shown that lack of sleep was linked with cognitive decline. A small 2018 study published in the Proceedings of the National Academy of Sciences found that losing just one night of sleep led to an increase in beta-amyloid production. Beta-amyloid is a metabolic waste product found in between brain cells. It has been long linked to brain disorders, such as Alzheimer's disease.

The National Sleep Foundation advises that healthy adults need between seven and nine hours of sleep per night. Babies, young children, and teens need even more sleep for their growth and development. And people over 65 should also get seven to eight hours per night, the foundation says.

One unanswered question from the Washington University study is whether increasing sleep time for short sleepers would help their cognitive performance.

But lead writer Lucey said each person's sleep needs are individual. If people feel rested, there is no need to change how they sleep. But those who are not sleeping well should know that sleep problems often can be treated, Lucey said.

Dr. David Holtzman, another top researcher on the study, added, "It suggests that sleep quality may be key, as opposed to simply total sleep."

impairment - n. a condition in which a part of your body is damaged

sweet spot - n. an ideal or most favorable factor for particular activity or purpose

associate - v. to think of one thing when you think of another

recommend - v. to suggest that someone do something

metabolic - adj. related to a chemical process that grows and heals

key - n. something that is necessary in order to achieve something