Update Required To play the media you will need to either update your browser to a recent version or update your Flash plugin.
By Ashley Thompson
28 June, 2016

There was no immediate claim of responsibility. 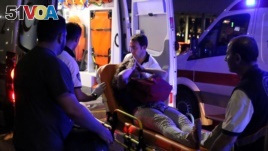 An injured woman covers her face as she is carried by paramedics into ambulance at Istanbul Ataturk Airport, Turkey, following explosions at the facility, June 28, 2016.

Turkish state television reported that one explosion happened at a control point at an entry to the international arrival area.

One witness told VOA's Turkish Service: "There were two small explosions and then a large one. People scattered everywhere. They didn't know where to go. We were waiting for my sister, but couldn't find her. We're [still] waiting."

Witnesses said police shot at the suspects after one attacker opened fire with a gun.

All flights at Ataturk were suspended after the attack. Officials later permitted incoming flights that were in holding patterns over the city to land at the airport.

All other incoming flights were sent to other cities.

Ataturk is one of the largest and busiest airports in Europe.

Istanbul has been the target of several terror attacks this year. Earlier this month, a car bombing of a police bus killed 11 people.

scattered – v. to separate and go in different directions

holding pattern – n. a flight path that can be repeated as an airplane waits to land