Update Required To play the media you will need to either update your browser to a recent version or update your Flash plugin.
By Anna Matteo
11 April 2022

Since the pandemic started, experts have warned of a mental health crisis facing American children. That is now happening in the form of increased depression, anxiety, eating disorders, fights, and thoughts of suicide. 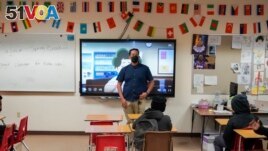 Sharon Hoover is a professor and co-director of the National Center for School Mental Health at the University of Maryland. She said child abuse and neglect increased during the pandemic.

Students who lacked technology or good internet connections were isolated more than others. They fell behind in their studies and socially. And returning to school increased the anxiety of some children.

"We cannot (can't) assume that ‘OK we're back in school, it's been a few months and now everyone should be back to normal.' That is not the case," said Hoover.

The silver lining -- which means a good thing to come from a bad situation -- is special mental health training for teachers.

This training helps teachers learn warning signs of mental health risks and substance abuse in children, and how to prevent a tragedy. The program is run by the National Council for Mental Wellbeing and is available in every state in the U.S.

One teacher taking the training is Benito Luna-Herrera. He teaches seventh-grade social studies in a high-poverty area of the Mojave Desert, a two-hour drive from Los Angeles, California.

Just two weeks after the training, he saw a student arguing online with her then-boyfriend.

"I asked her if she was OK," he said. Little by little, the girl told Luna-Herrera about problems with friends, her boyfriend, and at home. She said she felt alone. The 12-year-old told Luna-Herrera she had considered hurting herself.

The training taught him how to handle such a crisis: Raise the alarm. Get expert help. Do not leave a person thinking about suicide alone.

As Luna-Herrera continued talking to the girl, he texted school officials. They called an emergency number sending police to the girl's home. The police spoke with her mother, who was surprised about her daughter's suicidal thoughts.

Steps in the training

The training helps teachers recognize the difference between normal ways of dealing with pressure and warning signs of serious mental suffering. Those warning signs can be clear, or they can be hidden.

For example, warning signs include talking about death or suicide. But saying, "I can't do this anymore," or "I'm tired of this," could be warnings, too.

Changes in behavior could be cause for concern. For example, a teacher might be concerned if a child:

The training tells adults to ask open-ended questions. These questions need more than simple yes or no answers. The goal is to keep the child talking.

The adults are advised to see the importance of the problem and avoid saying, "You'll be fine," or "It's not that bad." They are also advised to not put themselves into a child's problems with comments such as, "I went through that, too."

anxiety – n. a feeling of worry, nervousness, or unease, typically about an imminent event or something with an uncertain outcome.

address – v. to deal with : give attention to

isolated – adj. occurring alone or once

assume – v. to accept as true

grade – n. a division of a school course representing a year's work

tidy – adj. neat and orderly in appearance or habits; well ordered and cared for