Update Required To play the media you will need to either update your browser to a recent version or update your Flash plugin.
By VOA
23 March 2022


An Omicron sub-variant of the COVID-19 virus is spreading fast in many parts of the world and raising concerns for experts.

This week, the Centers for Disease Control and Prevention reported that BA.2, a sub-variant of Omicron, has caused 35 percent of all new cases in the United States. In the northeastern states, including New York, New Jersey and Massachusetts, BA.2 has made up more than half of the cases. The total number of infections, however, has been decreasing and officials around the country have lifted measures such as required cloth face coverings and social distancing.

The Omicron variant of the virus was first reported last November in South Africa. It has three main sub-variants known as BA.1, BA.2 and BA.3. Scientists believe they all appeared at the same time but Omicron BA.1 was linked to most of the cases reported over recent months. 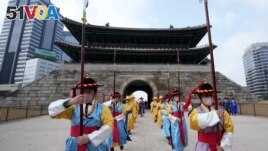 Performers wearing face masks during ceremonies at the Sungnyemun Gate in Seoul, South Korea, March 15, 2022. South Korea had its deadliest day yet of the pandemic recently with a record increase in infections driven by Omicron variant. (AP Photo/Ahn Young-joon)

Last month, the World Health Organization (WHO) said reported cases of Omicron BA.2 have been increasing in comparison to BA.1. The health agency found that although BA.2 could spread faster, it does not make people sicker than BA.1.

By Tuesday, the WHO wrote in its weekly report that BA.2 had overtaken all other versions of the virus in Southeast Asia, the Eastern Mediterranean, Africa, the Western Pacific and Europe. In Britain, the Office for National Statistics also reported that cases of BA.2 infection had outnumbered other versions by early March.

Dr. Anthony Fauci is the U.S. government's top infectious disease expert. He told ABC's This Week program that the U.S. would likely see an increase of infections like Britain. Fauci said: "They have BA.2. They have a relaxation of some restrictions such as indoor masking." Additionally, immunity from vaccines and past infections was also decreasing.

Dr. Eric Topol is head of Scripps Research Translational Institute. He told the Associated Press, "It's inevitable we will see a BA.2 wave here."

However, Ali Mokdad, a professor at the Institute for Health Metrics and Evaluation (IHME) at the University of Washington does not expect a big increase in the U.S. in the coming weeks.

He wrote on Twitter: "Our models do not suggest there will be much of an increase in the US in the next weeks, if at all. However, it is possible that the rapid return to pre #COVID19 behavior and the spread of BA.2 could see a short period of increasing case numbers."

And an early study in Qatar also suggests that vaccines from Pfizer-BioNTech and Moderna will work against both Omicron sub-variants. The results suggest that the level of protection against BA.2 is about the same as for BA.1.

variant – n. something that is different in some way from others of the same kind;

masking –n. the act of putting on a face covering especially for health reasons

inevitable –adj. not avoidable; sure to happen