The Problem with Long-Term Leaders

Update Required To play the media you will need to either update your browser to a recent version or update your Flash plugin.
By Susan Shand
22 November, 2017


Many countries place limits on the amount of time a leader can serve in office.

The need to change leaders after a limited number of terms in office is written into the laws of a number of countries.

This is often because many people believe that leaders with too much power for too long become corrupt. Limiting a person's time in office is seen by many as a way to improve governance.

Some leaders, however, do not agree. There are leaders who go so far as to change their country's constitution to remain in power.

A wealthy Sudanese businessman, Mohamed Ibrahim, thought of a way to influence leaders to willingly give up power. He promised a reward of $5 million for any African leader who led his country well and who observed term limits in the interest of democracy.

Since 2007, only four presidents have received what is known as the Ibrahim Prize for Achievement in African Leadership.

A number of leaders of African countries have been in power for generations.

Paul Biya of Cameroon is the longest-serving leader in the world. His 42 years as either prime minister or president have been marked with election fraud and human rights abuses.

Biya spends a lot of time in Switzerland at the Hotel InterContinental in Geneva. He has been criticized as one of the world's worst dictators. He also convinced the National Assembly to change the Constitution to remove term limits.

The BBC reported in 2012 that Biya spent a vacation in France three years earlier in which he spent $40,000 a day on 43 hotel rooms.

Teodoro Obiang Nguema became the president of Equatorial Guinea in 1979, after deposing his uncle. At every election, with or without an opponent, Obiang wins over 90 percent of the vote. Last year, he appointed his son, Teodorin Obiang, as the vice president. 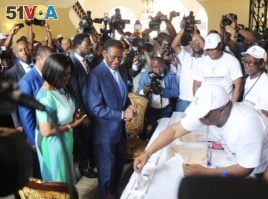 Equatorial Guinea incumbent president and candidate Teodoro Obiang Nguema (C) and his wife Constancia Mangue (L) arrive at the polling station on April 24, 2016 in Malabo during the presidential election vote.

In February 2012, French police raided a mansion in Paris belonging to Obiang and they discovered luxury goods inside worth millions of dollars. In July 2012, the French issued an arrest warrant for Obiang. Police seized the mansion, and Obiang was found guilty of money laundering, although he was not present for the trial.

Long-serving leaders are not only in Africa, however.

This amendment applies only to Nazarbayev. It states that the first president will have no limits on how many times he can run for office.

Subsequent presidents, however, will be limited to a five-year term. Opposition members often claim he has hidden more than $1 billion in a Swiss bank.

Kim Il-sung was the leader of North Korea from 1948 until 1994, serving as either a prime minister or president. He passed power to his son, Kim Jong-il and then to his grandson, Kim Jong Un.

These three generations are considered responsible for creating a "cult of personality" in the country. However, North Korea's economy has declined in the last 50 years. United Nations experts on North Korea say this economic weakness led to a four-year famine in the mid-1990s that caused the deaths of up to 3 million people.

Another result of having an unlimited leader is that often economic and technological development slows. For this reason, many western democracies have put limitations on their leaders, including the United States.

America's 32nd president, Franklin D. Roosevelt, was elected to four presidential terms, serving from 1933 until his death in 1945. After the death of the only American president to serve more than two terms, the U.S. Congress approved the 22nd Amendment to the Constitution. The amendment says "no person shall be elected to the office of the President more than twice."

Susan Shand wrote this story for Learning English. Mario Ritter was the editor.

depose - v. to remove (someone) from a powerful position

mansion - n. a large and impressive house : the large house of a wealthy person

luxury - n. a condition or situation of great comfort, ease, and wealth

money-laundering - v. to make money acquired through corruption appear to be honest

subsequent - adj. happening or coming after something else

cult –n. a situation in which people admire and care about something or someone very much or too much