Update Required To play the media you will need to either update your browser to a recent version or update your Flash plugin.
By Dan Friedell
08 March, 2016

A solar eclipse will pass over Earth on Wednesday, starting in Southeast Asia March 9, and ending in the western Pacific on Tuesday evening, March 8.

No, the Earth is not changing direction. 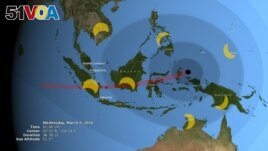 The animated shadow path of the March 9, 2016 total solar eclipse, showing the umbra (black oval), penumbra (concentric shaded ovals), and path of totality (red). The appearance of the Sun relative to the local horizon is shown for eight locations.

Before science explained the phenomenon of a solar eclipse, days when the sun went dark were thought to be bad omens.

The website TimeandDate.com says ancient cultures believed the sun disappearing during the day was a sign that gods were fighting or animals were taking bites out of the sun.

During the March 8 and 9 eclipse, the shadow will cross the International Date Line.

The date line runs from the North Pole to the South Pole, along the Pacific Ocean. It is where we measure the end of one day and the beginning of another.

The eclipse will be visible in countries like Indonesia and Thailand, starting at zero hours (0000) UTC on March 9.

About four hours later, the shadow will reach the U.S. state of Alaska, concluding just before nightfall Tuesday, March 8.

People are already excited about the eclipse on social media sites.

NASA posted a video on Monday, talking about the eclipse, and it has thousands of likes and re-tweets on Twitter.

The website EarthSky.org says many people will see a partial eclipse. But people in Indonesia and on the island of Borneo may see a total eclipse. That is because they are in the path of totality. That is where the sun is completely blocked by the moon.

Larry Koehn posted an animation on his website (shadowandsubstance.com) showing the path of the eclipse compared to UTC time.

Lots of people also posted notes about how to safely watch the eclipse.

But ABC News has a story about a man who convinced Alaska Airlines to reschedule its flight from Alaska to Hawaii in order to coincide with the eclipse so passengers could get a good view.

Joe Rao is an astronomer from New York, and an eclipse chaser. It will be his 10th eclipse. He says he will bring 200 pairs of special glasses for fellow passengers who want to see the eclipse.

A group of astronomers is doing a live webcast from Palu City on the Indonesian island of Sulawesi. If you want to watch them, you can find them on YouTube by looking up Slooh.

In case you missed this one, do not worry. There will be another total solar eclipse in just over a year, on August 21, 2017. It will be visible in the U.S., starting in Oregon and ending in South Carolina.

Dan Friedell wrote this story for Learning English based on information from the New York Times and EarthSky.org. Kathleen Struck was the editor.

Would you go out of your way to experience an eclipse? Did you see the eclipse on March 9 yourself? Write to us in the Comments Section or on 51VOA.COM.

solar eclipse – n. an occasion when the sun looks like it is completely or partially covered with a dark circle because the moon is between the sun and the Earth

path of totality – n. during a solar eclipse, this is a small area where the sun is completely blocked by the moon.

omen – n. a warning of something bad that will happen in the future

phenomenon – n. something (such as an interesting fact or event) that can be observed and studied and that often is difficult to explain

animation – n. a way of making a movie by using a series of images that are somewhat different from one another and that when seen quickly, one after another, create the appearance of movement

convince – v. to persuade; to cause (someone) to agree to do something

coincide – v. to happen at the same time as something else