Update Required To play the media you will need to either update your browser to a recent version or update your Flash plugin.
By Ashley Thompson
31 January, 2017

Walt Disney Pictures has released the final trailer for its remake of "Beauty and the Beast." The movie will come out in March.

Disney's first "Beauty and the Beast" was an animated film. It came out in 1991. The story is based on a French fairy tale written by Jeanne-Marie Leprince de Beaumont. 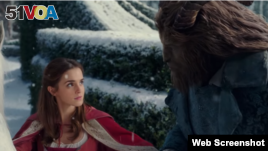 A scene from the latest trailer of Beauty and the Beast

The latest trailer shows Belle as she is imprisoned by the Beast in his large castle. It also shows her meeting some of the castle's so-called staff members. They include household objects, like candles, teacups and teapots. The trailer also shows Belle and the Beast dancing together. Watson is seen wearing Belle's iconic yellow dress.

Fans of the earlier "Beauty and the Beast" are pleased that the live-action version looks very similar to the animated classic. One fan even created a video comparing scenes from the 1991 film to scenes from the newest trailer.

But, some say Disney should have tried to make the live-action version more original. Writer Michael Welsh wrote on Nerdist.com that if the movie is not a success, "a major criticism will be that it wasn't allowed to be its own thing and to exist on its own terms."

"Beauty and the Beast" opens in U.S. theaters on March 17. It opens March 15 in the Philippines; March 16 in Chile, Argentina and Cambodia; March 30 in Brazil; and April 21 in Japan.

Ashley Thompson adapted this report from Reuters, with additional materials. Hai Do was the editor.

trailer - n. a short video of a movie or program that is used to advertise it

fantasy - n. a book, movie, etc., that tells a story about things that happen in an imaginary world

ballad - n. a slow popular song that is typically about love

original - adj. not like others : new, different, and appealing