Update Required To play the media you will need to either update your browser to a recent version or update your Flash plugin.
By Dan Friedell
28 June, 2017

He wrote about then-candidate Trump's promises to give money to charity. He reported that Trump's own organization donated very little money over the years. 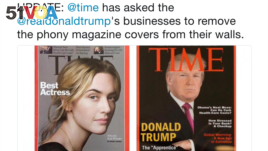 He also reported on an old recording in which Trump is heard talking about touching women without their permission.

Fahrenthold won a Pulitzer Prize this year for his reporting on Trump. The yearly prize honors journalists who do great work.

This week, Fahrenthold reported on another Trump-related issue for the Post. He wrote about a framed TIME magazine cover that hangs on the walls at some of Trump's golf courses in the United States, Ireland and Scotland. The cover features a photo of Donald Trump himself. It is dated March 1, 2009. The cover says Trump's television show, "The Apprentice," is a big success.

But, there is one problem. TIME was not published on that date.

The real TIME magazine cover closest to that date came out on March 2, 2009. It has a picture of British actress Kate Winslet.

The version hanging at Trump's golf courses is different.

Staff members who work for the president at the White House and those who run the golf courses did not respond to the Washington Post's questions about the fake magazine cover.

TIME said it has asked Trump's business, known as the Trump Organization, to take down the fake magazine covers.

TIME named Trump its 2016 Person of the Year. He was on the magazine's cover at the end of last year.

Many people on social media reacted to the story. They used photo-editing software and made their own versions of magazine covers featuring themselves -- and even their cats. One politician made up his own TIME cover.

Some also remembered a scene from the 1998 movie, "The Big Lebowski." In the film, the main character looks into a mirror that looks like a TIME magazine cover.

Do you think President Trump should take down the magazine covers? We want to know. Write to us in the Comments Section or on 51VOA.COM.

charity – n. an organization that helps people who are poor, sick, etc.

frame – v. to put (something) inside an open structure that holds it

border – n. a decorative design along the edge of something (such as a rug or wallpaper)

software – n. the programs that run on a computer and perform certain functions

character– n. a person who appears in a story, book, play, movie, or television show