Luis Fonsi’s “Despacito” May Be the Song of the Summer

Update Required To play the media you will need to either update your browser to a recent version or update your Flash plugin.
By Dan Friedell
12 June, 2017

Summer does not officially begin in the United States and other countries in Earth's Northern Hemisphere for more than a week.

Yet you have probably heard the song of the summer of 2017. 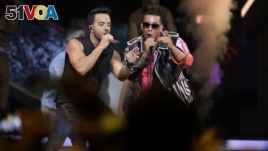 That is Luis Fonsi's "Despacito." Fonsi is from the U.S. territory of Puerto Rico. He wrote "Despacito" in Spanish, one of the two official languages on the island. The other is English.

"Despacito" is one of the top songs in the world right now. In fact, some music critics think it might be the song of the summer.

The website Billboard.com publishes lists of hit songs. One of the lists is called "Songs of the Summer." Right now, a version of "Despacito," with Justin Bieber singing along with Fonsi, is at the top of the list. Daddy Yankee, a Spanish-language rap artist, also contributes lyrics to both versions of the song.

Bieber learned how to pronounce Spanish words for the song.

"Despacito" means "slowly" in Spanish. Fonsi says the song is about letting romance take its time.

But Fonsi's song may have more in common with another song of the summer: the 1996 hit "Macarena" by Los Del Rio. That is because "Despacito" is the first song performed mostly in Spanish to reach number one on Billboard's "Hot 100" list since then.

The only other mostly Spanish song to reach the number one position was the Los Lobos version of Ritchie Valens' "La Bamba" in 1987.

The version of "Despacito" with Bieber is the top song on the "Hot 100" list in each of the past four weeks.

The original version of "Despacito" was released in January. Its music video on YouTube has been played over 1.9 billion times since then. The version with Bieber has been played almost 300 million times more. Combined, it is one of the most-streamed songs ever.

Chris Molanphy is a music critic for Slate.com. He wrote recently that Bieber's English verse seems like an unnecessary addition to an already successful song. But he says it was something else – what he called the "X-Factor" -- that moved the song to the top of the chart.

As a result, he wrote, the song "shows no signs of slowing down."

What do you think of "Despacito?" We want to know. Write to us in the Comments Section or on 51VOA.COM.

lyric – n. the words of a song

romance – n. an exciting and usually short relationship between lovers

fancy – adj. not plain or ordinary

stream – v. to play continuously as data is sent to a computer over the Internet

X-Factor – n. something special that helps influence a result