Update Required To play the media you will need to either update your browser to a recent version or update your Flash plugin.
By Gregory Stachel
07 November 2021


Schools in Uganda have been fully or partly closed for more than 77 weeks because of the coronavirus pandemic. The United Nations cultural agency says that is the longest break anywhere in the world.

Many countries around the world moved their school lessons to the internet. But most schools in the East African country were unable to offer virtual schooling.

Without school, some Ugandan students got married. Some are dealing with unwanted pregnancies. Others have found jobs.

Efforts to control the spread of COVID-19 have upset the lives of children around the world. It has caused difficulties for parents. It has also removed many safeguards.

The aid group Save the Children said the pandemic has led to the "biggest global education emergency of our time." The group identified 48 countries, including Uganda, whose school systems are at extreme or high risk of collapse. Most are in sub-Saharan Africa. This part of the world has long struggled with high dropout rates among students and a shortage of well-trained teachers. 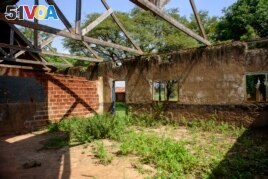 Weeds grow in a classroom with a roof that was destroyed during a storm just before the coronavirus lockdown, Oct. 19, 2021. (AP Photo/Nicholas Bamulanzeki)

Some other countries that saw long closures also struggled to teach children. Mexico has low internet connectivity in many places. It chose to use educational programming by television. The pandemic has been disastrous for children in Mexico. It has led to millions leaving school as well as increases in child murder, teen pregnancies, and violence in homes.

In Iraq, virtual learning is "limited and unequal," the World Bank has reported.

Some wealthier countries did better. Public schools in Kuwait did not have what they needed to go virtual when the pandemic first struck. All schooling was suspended for seven months. But the oil-rich Gulf Arab state spent $212 million to create virtual school programming. The costly effort has been considered a success.

Uganda first closed it schools in March of 2020, shortly after the first coronavirus case was confirmed on the African continent.

Some classes were reopened to students almost one year later, in February. But a total closure happened again in June as the country faced its first major increase of coronavirus cases.

Today, Uganda is the only country in Africa where schools remain closed.

President Yoweri Museveni announced last week that schools would reopen in January. His announcement comes as the country has seen a decrease in virus cases in recent months.

Experts at Johns Hopkins University say the country is now recording an average of 70 new infections each day. So far, Uganda has fully vaccinated about 700,000 of its 44 million people.

First lady Janet Museveni is the country's education minster. She has rejected criticism that the country is not doing enough to teach its children. In a speech in October, she asked "why our children cannot be safe at home. What happened to the family?"

Some Ugandans say the problem is that the government has not found a successful way to keep up learning during lockdown periods. One suggested solution was to broadcast lessons through free radio sets. But that plan did not happen. In rural areas, many children do not have learning materials of any kind.

In the Ugandan town of Busia, it was common to see children selling goods in the streets even before the pandemic hit. Things have only gotten worse.

The Associated Press recently spoke with some children there. Many of them expressed hopelessness during the long lockdown.

Mathias Okwako is one of those children. He searches for gold with other children to pass the time. He wears his school clothing while searching for the valuable metal because he has nothing else to wear. He regrets that he must work; the tiring days leave him little energy to study on his own.

"No time (for) reading books," he said. "If you try to open a book, you just go asleep, and sleep up to tomorrow."

Children work alongside adults at the unofficial gold mine. Some of the adults are their teachers. Observers say the risks and feelings of doing dangerous work have led to fights. Some children have broken bones while digging. A usual day can bring in just over $2, enough for a child to buy a used pair of shoes.

At Okwako's Mawero school, teacher Emmy Odillo said he expects a small number of the 400 students to return next year.

Bosco Masaba is the director of studies at Busia Central Primary school. He said he normally sees some students in the streets selling fruit or eggs. He heard that some girls become house workers for families across the border in Kenya.

Masaba said, "Some, they have lost hope completely."

Rodney Muhumuza reported this story for The Associated Press. Gregory Stachel adapted it for VOA Learning English. Ashley Thompson was the editor.

qualified – adj. having the necessary skill, experience, or knowledge to do a particular job or activity