US Says It Will Deport Over 100 Illegal Immigrants

Update Required To play the media you will need to either update your browser to a recent version or update your Flash plugin.
By Jim Dresbach
05 January, 2016


More than 120 illegal immigrants have been arrested and detained by U.S. immigration officials in Texas, Georgia and North Carolina.

The detainees are from El Salvador, Guatemala and Honduras. Most are mothers or children traveling alone. They have entered the United States from Mexico since May 2014. 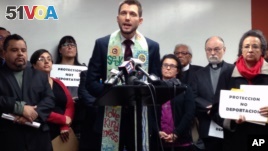 The Rev. Noel Andersen, center, from the Church World Service, condemns the alleged raids of Central American families with final order of deportation, on Tuesday, Dec. 29, 2015, at the headquarters of the Coalition for Humane Immigrant Rights of Los Angeles, in Los Angeles. Religious leaders and pro-immigration activists demanded president Barack Obama to stop the alleged raids. (AP Photo/Edwin Tamara)

Close to 100,000 Central Americans crossed into the U.S. in the last 20 months, according to VOA News.

Experts say the immigrants are fleeing gang violence in Central America. Also, they seek to reunite with family members in the United States.

The American Civil Liberties Union (ACLU) condemned the threat of deportation. The ACLU said federal officials are using the detentions as a "scare tactic to deter other families fleeing violence in Central America from coming to the United States."

The staff at VOA News wrote this story for VOAnews. Jim Dresbach adapted it for Learning English. Kathleen Struck was the editor.

detention – n. the act of keeping someone in a prison or similar place