Update Required To play the media you will need to either update your browser to a recent version or update your Flash plugin.
By George Grow
10 February, 2018

A new study found that the same is true of non-citizens who left their American homes to fight in Syria and Iraq.

In fact, only a handful of the fighters have returned to the U.S. from the battlefront, the study notes.

The findings are from a project of the Program on Extremism at The George Washington University in Washington, D.C. It identified 64 individuals who fought or assisted Islamic State, al-Qaida and other groups in Syria and Iraq.

Of the 64 travelers, only 12 are known to have returned to U.S. territory, the study found. Nine of them have been arrested and charged with crimes relating to terrorism.

The study noted that none have successfully carried out an attack in the United States.

"The risk of returned travelers being engaged in terrorist attacks has, to date, been limited," said a report on the study.

The writers of the report noted, "There is currently no publicly available evidence to suggest that American travelers have slipped into the country without the knowledge of authorities." They said that "homegrown" extremists currently appear to be more likely to carry out jihadist attacks than returning travelers.

Compared to European countries, the U.S. faces a smaller risk from returning travelers. That is partly because of the greater distance and difficulty in reaching the Middle East from the United States.

U.S. intelligence officials estimated that more than 40,000 foreign fighters have traveled to Syria and Iraq. Of these, only 5,000 to 6,000 were said to come from Western countries.

The exact number who successfully left from the United States is unclear. Officials have said that about 250 to 300 U.S.-based people left or tried to leave to join groups fighting in Syria. Not all of them made it.

The study found at least 50 were arrested before leaving the United States. That represents about one-third of all U.S. residents who have been charged with crimes related to the Islamic State group.

Of the 64 travelers identified in the study who did leave the U.S., 22 are thought to have died in Syria or Iraq. Officials are unsure of the condition and whereabouts of the others. 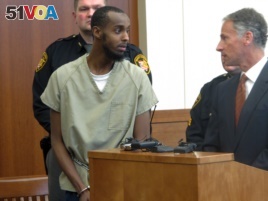 FILE - Abdirahman Sheik Mohamud, left, speaks with his attorney, Sam Shamansky, during a hearing to set bond on charges of money laundering and providing support for terrorism in Columbus, Ohio, Feb. 25, 2015.

The study identified a single returning traveler who sought to carry out an attack in the United States. That was 23-year-old Abdirahman Sheik Mohamud, a naturalized citizen from Somalia.

Mohamud left his home in Ohio to join Jabhat al-Nusra, a group allied with al-Qaida, in April 2014. While in Syria, he was trained in explosives and hand-to-hand fighting. He was sent back to the United States in June to carry out an attack.

But in February 2015, while still plotting the attack, Mohamud was arrested. He admitted guilt to the charges and was sentenced to 22 years in prison.

Other than Mohamud, only one other traveler sought to carry out a terror attack. But that attack, a suicide bombing, happened only upon returning to Syria after avoiding prosecution in the United States.

In any case, the study's authors say the findings suggest fears once voiced by U.S. officials of a "terrorist diaspora" seem to be overstated.

Yet the George Washington University study did find some reasons for concern.

Study co-author Seamus Hughes says the average prison sentence for those who went overseas to take part in the fight in Syria and Iraq is only 10 years. He noted that that sentence is shorter than the average prison term for a would-be U.S.-based jihadist arrested at the airport.

Part of that might be linked to the difficulty in making a criminal case based on terrorist activity in another country.

Hughes said another issue could be that the returnees may have been able to share information with investigators and anti-terrorism officials in exchange for lighter sentences.

But just like with the would-be jihadists, these travelers will eventually get out of prison. And Hughes and others believe the United States should be doing more to help these individuals. They note the lack of U.S. programs for former prisoners returning to society could lead to problems in the future.

engage – v. to take part in

jihadist – n. a Muslim who supports a campaign against non-believers

resident – n. a person who lives in a place for some length of time

whereabouts – n. the place where someone or something is

prosecution - n. the act of trying someone accused of a crime

diaspora – n. a group of people who live outside their homeland or the home of their ancestors