Update Required To play the media you will need to either update your browser to a recent version or update your Flash plugin.
By Bryan Lynn
18 October, 2016

The president said the completion rate for the 2014-2015 school year was 83.2 percent – the highest percentage on record. The numbers are based on information gathered from schools across the United States.

Obama announced the increase Monday during a visit to a high school in Washington, D.C. He said that a goal of his presidency has been to improve the chances of all young Americans finishing high school and continuing their education in college. The higher rate shows "we've made real progress," he said.

Nationwide, the high school graduation rate has risen about four percentage points since the 2010-2011 school year. That was the first year when all states followed a consistent, four-year measure of high school completion. 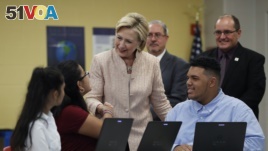 Democratic presidential candidate Hillary Clinton talks with students as she tours classrooms at John Marshall High School in Cleveland, Aug. 17, 2016, before participating in a campaign event.

U.S. officials say the higher graduation rates were reported across all racial and ethnic groups. The largest increase came from black students. Their graduation rate rose 7.6 percentage points over the four-year period.

For Hispanic Americans, the graduation rate rose 6.8 percent. The rate for Native American and Alaska Native students jumped 6.6 percent. There were also increases for students from poor families, as well as those with disabilities and English learners.

The rate for white students was up 3.6 percent, while Asian and Pacific Islanders experienced an increase of 3.2 percent.

Nearly every state reported progress in high school graduation rates since 2010-2011, according to the U.S. data. The District of Columbia had the biggest jump during the 2014-2015 school year -- a seven percentage point increase compared to the year earlier. In this July 21, 2014 file photo, students at a summer reading academy at Buchanan elementary school work in the computer lab at the school in Oklahoma City.

On Monday, Obama spoke at Washington's Benjamin Banneker Academic High School. He noted that the school had a perfect graduation record.

"Of course here at Banneker, you graduate 100 percent. It's been a while since I did math, but 100 percent is good. You can't do better than that."

U.S. Secretary of Education John B. King Jr. said the improved rate shows "meaningful progress." But he said more needs to be done in U.S. schools to prepare students for college and careers.

"Certainly we share the concern that we have more work to do to make sure every student graduates ready for what's next," he said.

Obama told students they need to prepare for careers now more than ever because we live in a global economy.

"The best jobs are going to go to the people who are the best educated, whether in India or China, or anywhere in the world."

The Obama administration credited several government programs with helping to improve high school graduation rates. One brought high-speed internet and high-technology tools to classrooms. Another gave assistance to children from low-income families to get them into preschool.

Bryan Lynn wrote this story for VOA Learning English, based on reports from the Associated Press and Reuters. George Grow was the editor.

graduation – n. the act of receiving a diploma or degree for completing educational study

consistent – adj. acting or done the same way over time

preschool – n. school for children who are usually between the ages of 3-5