Update Required To play the media you will need to either update your browser to a recent version or update your Flash plugin.
By Christopher Jones-Cruise
16 October, 2016

The police said people working at a call center in India spoke with the U.S. citizens by telephone. They said the callers acted like they were working for the Internal Revenue Service (IRS), the federal agency that collects income taxes.

About 200 police officers raided three buildings in Thane, a community near the city of Mumbai. Police said the workers used phones in those buildings to call the Americans. 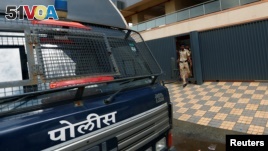 Policemen come out of one of the closed call centers in Mira-Bhayander, on the outskirts of Mumbai, India, Oct. 6, 2016.

Parambir Singh is the police commissioner in Thane. He said that about 700 people worked in the buildings, which were open all day and night. Singh said the workers would call Americans and tell them that they owe taxes. If the Americans failed to pay the money immediately, the callers threatened to send police in 30 minutes.

The Internal Revenue Service has been telling Americans that it will not send police to arrest them. It also says IRS agents do not threaten people. The agency tells people not to send money electronically to callers who are demanding that method of payment.

Indian officials say the call center workers kept more than two-thirds of the money. The rest was kept by people helping them in the United States.

In India, hundreds of Western companies use large companies that employ English-speaking workers. These workers either answer questions from callers overseas or process payments. The employees are usually trained to use sound like people in the countries from which the customers are calling. Police said those working at the call center were trained to sound like Americans.

Indian police said they planned to share information about the raid with American officials. Police believe the plot discovered in Mumbai may have also targeted people in Britain and Australia.

customer – n. an individual who buys goods or services from a business