Update Required To play the media you will need to either update your browser to a recent version or update your Flash plugin.
By Mario Ritter
13 October, 2016

Assembly president Peter Thompson introduced the resolution. It was accepted by all 193 U.N. member states.

With the approval, diplomats broke into applause. 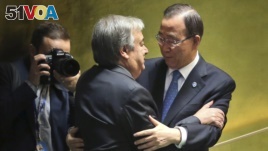 Current Secretary-General of the United Nations Ban Ki-moon, right, embraces the Secretary-General designate, Antonio Guterres of Portugal, after he spoke during his appointment at U.N. headquarters, Oct. 13, 2016.

He was elected from among 13 candidates. Seven women and six men campaigned for the secretary-general position.

His election disappointed many who had campaigned for the first woman or the first Eastern European to lead the U.N.

Guterres spoke to VOA during the campaign. He said he was seeking to lead the U.N. because he wanted to "create the conditions for solutions" to global challenges.

Gutterres served as prime minister of Portugal from 1995 to 2002.

Russia's U.N. Ambassador, Vitaly Churkin also praised Guterres. Churkin said, "He's a high level politician. He's been prime minister of his country. He is a person who talks to everybody, listens to everybody, speaks his mind, very outgoing, I think, open person."

Guterres will be the ninth person to hold the position in the organization's 71-year history.

As chief of the U.N., the secretary-general oversees about 44,000 employees and more than 100,000 peacekeepers. The position involves dealing with issues like human rights, refugees and climate change, as well as fund-raising for the U.N.'s many campaigns.

Joshua Fatzick reported this story for VOA News. Mario Ritter adapted it for VOA Learning English with additional material from AP, AFP and Reuters. Ashley Thompson was the editor.

What do you think of the choice of Antonio Guterres as the next secretary-general of the United Nations? Let us know in the comment section.

applause – n. a show of approval or appreciation at a play, speech, sporting event, etc., in which people strike their hands together over and over

acclamation – n. a vote on something by cheers or clapping

disappointment – n. the state or feeling of being made unhappy by something or someone

outgoing – adj. used to describe someone who is friendly and likes being with and talking to other people