Update Required To play the media you will need to either update your browser to a recent version or update your Flash plugin.
By Pete Musto
11 October, 2016

Large amounts of water from a typhoon hit villages near the Tumen River in September. The river runs along the borders with China and Russia.

Non-governmental organizations report that at least 138 people have died. Reports also say 400 people are missing and that the flooding has forced 70,000 people to leave their homes. 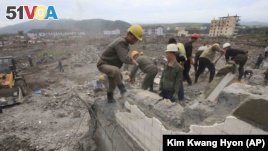 Some call this one of the worst humanitarian disasters to affect North Korea since the 1990s. At that time, lack of rain and poor harvests led to reports of starvation across the country.

The recent floods have destroyed 20,000 homes and many schools and hospitals. Floodwaters also damaged 30,000 hectares of crops that were almost ready for harvest.

Paolo Fattori is the North Korea program director for Save the Children, an international children's rights organization. Fattori says the flood victims need clean water, food and new shelters. These are all needed in the next few weeks, before the temperatures in the region drop below freezing.

"In all the areas there is a strong need for support, actually because this event occurred at the end of the summer season, which means that the time to respond is very, very short," Fattori said.

The United Nations Children's Fund and other organizations together are asking for $28.2 million in aid. They say money is needed both right away for urgent needs and for long-term assistance. This includes rebuilding homes, schools, hospitals and repairing damaged water supply and sanitation systems.

Currently the fund to help North Korea has collected only about $6.5 million. Humanitarian organizations say that is far less than what is needed.

However, raising money for North Korean humanitarian aid is difficult because of the country's nuclear weapons program.

The North Korean government has carried out five nuclear tests since 2006. Two of the tests took place this year. North Korea has also carried out land-based and submarine launched missile tests this year. As a result, the United Nations Security Council, South Korea and the U.S have placed sanctions on North Korea.

On Sunday, Power said those with emergency aid to offer the country cannot be sure their money and assistance will go to the people in need.

Humanitarian organizations say the aid for North Korea is used to directly help victims and affected areas. They say money is not given to or controlled by the government.

"Most of the funds are going to international procurement [of] specific materials that are needed," Fattori said. "No funds are directly managed by the local government, in the case of Save The Children for sure."

The South Korean government still is not providing any flood aid to the North.

South Korean officials warn that any aid would at some time be used to support the government of North Korean leader Kim Jong Un. They say he is spending billions of dollars on nuclear and missile tests while most of his people live in poverty.

Jeong Joon-hee is the spokesman for the South Korean Unification Ministry. He recently said, "While North Korea is putting forth a huge amount of money and effort for provocations, it is [clear] our well-meaning purpose could be distorted if we provide support for the flood damage."The North Korean government says it

has brought 200,000 people together to help with the recovery effort. The government also has promised to build 20,000 homes and other buildings before winter arrives.

Fattori says the country's disaster recovery efforts have improved. But, he adds, the government is still not prepared to deal with a humanitarian disaster of this size without international support.

Brian Padden and Youmi Kim reported on this story for VOA News. Pete Musto adapted it for Learning English. Mario Ritter was the editor.

typhoon –n. a powerful ocean storm in the area of the northwest Pacific Ocean

humanitarian –adj. having to do with efforts to make people's lives better

starvation –n. suffering or death caused by not having enough to eat

region –n. an area of a country or the world

fund –n. an amount of money that is used for a special purpose

unification –n. the bringing together of people or things provocations –n. an action or occurrence that causes someone to become angry or to begin to do something

distorted –adj. to change something so that it is no longer true or accurate