Update Required To play the media you will need to either update your browser to a recent version or update your Flash plugin.
By Dan Friedell
08 October, 2016

Phytoplankton do well in cold water. But if water temperatures rise by only two degrees Celsius, the phytoplankton struggle. That is what happened in the last three or four years in the northern part of the Pacific Ocean.

Researchers say an unusual area of warm water spread throughout the Northern Pacific. Scientists called the warm water "the blob," as if it were a character in an old science fiction movie. 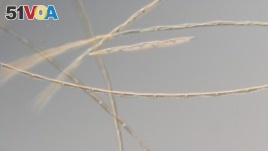 At its largest, the blob stretched 1,600 square kilometers and reached depths of 91 meters.

This large mass of warm water had a damaging effect on the ocean food chain. Many fish that depend on phytoplankton swam away from the area. As a result, sea birds and sea lions that eat those fish starved.

Scientists from the National Oceanic and Atmospheric Administration and the University of Washington have found that the warm ocean "blob" caused a harmful algae bloom. That fast growth in algae hurt fishing grounds along the U.S. West Coast and Canada's British Columbia.

The researchers recently published their study in the journal Geophysical Research Letters.

They looked at the algae, called P. australis. The researchers found that the algae can grow much faster than normal if it is exposed to warm water.

The higher levels of algae also produced more of a poisonous chemical that can cause problems for everything from shellfish to dolphins to sea lions. It also causes problems for humans if too much of the chemical builds up in their blood.

Researchers say algae blooms like this one will continue as ocean waters warm. The algae will hurt sea animals, birds, and fish. It may damage food resources for humans all over the world, the scientists say.

Kevin Enochs wrote this story for VOANews. Dan Friedell adapted it for Learning English. Ashley Thompson was the editor.

What do you think of the algae threat? We want to know. Write to us in the Comments Section or on 51VOA.COM.

food chain - n. a series of types of living things in which each one uses the next lower member of the series as a source of food — usually used with the