Update Required To play the media you will need to either update your browser to a recent version or update your Flash plugin.
By Alice Bryant
04 October, 2016


Nearly every day, there is a news story about an attack on members of India's Dalit community.

A few days ago, for example, six men beat a pregnant Dalit woman and members of her family. Al Jazeera television said they were attacked for refusing to remove a dead cow from the street.

Dalits are members of India's lower caste, or social class. The woman's attackers were members of a higher caste.

Beatings and other violence against Dalits are not new. What is new, however, is the community's reaction. 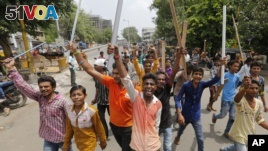 Recently, Dalits have been protesting in a number of ways. The pregnant woman, for example, is among a growing movement of Dalits who have promised not to clear the streets of dead animals – a job Dalits have long been expected to perform.

Other Dalits are taking their protest to the business world. At the end of September, for example, the writer and activist Chandra Bhan Prasad launched an online food company. The company prepares and sells grains, pickles, and spices.

For years, Chandra Bhan Prasad has fought to end India's caste divisions. He was born 58 years ago into a family of pig farmers in the eastern state of Uttar Pradesh.

Prasad grew up experiencing the prejudice of upper caste Hindus against those from lower castes. Historically, Hindu society divided people into four main castes, with Dalits being the lowest.

While doing research for the University of Pennsylvania, Prasad was shocked to find 80-year-old Dalits carrying heavy bundles of wheat on their head and laboring in the fields.

He also learned that the grains his community produced and ate were very healthy. For example, when Prasad was a child, millet was a popular grain among the Dalits. Now, health experts are calling millet a superfood.

Until recent years, Dalits could not prepare or even touch the food of higher castes, or enter their cooking areas. If Dalits touched these foods, the foods became "impure."

By naming his company "Dalit Foods," Prasad is protesting the belief that Dalits are not pure and therefore untouchable. The company has already received orders from a large hotel chain in India, according to Yahoo! Finance.

If his business is a success, Prasad believes it will support major social changes in India. Younger Dalits will begin believing that the country belongs to them, too, he said.

This Land is Your Land

Dalits are victims of thousands of violent attacks every year, according to the Associated Press (AP) news agency. The Times of India reported that crimes against Dalits rose 19 percent in 2014.

The country has also established affirmative action programs, such as saving university seats and government jobs for Dalits. But, generally, change remains slow.

Although the social position of Dalits has improved over the years, some leaders and police officers still do not enforce laws protecting them.

In 2014, for example, the crime records office documented more than 47,000 cases of discrimination at police stations around India, the AP reported.

Udit Raj, a member of Parliament, said that only two to eight percent of people accused of crimes against Dalits are found guilty. The AP reported his comment.

Raj, who is from New Delhi, is a supporter of expanding rights for Dalits. Caste divisions in India are not as rigid as they once were, partly the result of the country's economic growth over the past several years.

New jobs have pulled millions of Indians into large cities, where people of all castes live close to one another.

In rural areas, Dalits still suffer from a deep social divide. In villages, for example, lower castes are usually not permitted to enter religious temples or take water from wells.

Traditionally, Dalits have been forced to perform the least-wanted jobs, such as removing dead animals from roads and cleaning restrooms. Today, many Dalits are still expected to perform these jobs.

In August, thousands of members of the Dalit community attended a protest called "Dalit Pride March." The protesters promised to stop removing dead animals and doing other dirty jobs. They made the declaration a month after a group of angry higher caste men brutally beat four Dalit men in public.

The attackers accused the Dalit men of removing the skin from a dead cow. Cows are considered holy in India.

Prime Minister Narendra Modi has condemned attacks by upper caste men claiming to protect cows. These groups, which have been more active in the past few years, accuse lower castes, and sometimes Muslims, of killing the animals or eating their meat.

Protests have taken place all over Gujarat since the four men were beaten, the AP reported. In addition to the refusal to remove dead animals, the protesters want access to land, as most Dalits are landless, according to Al Jazeera.

Beena Pallickal is with the National Campaign on Dalit Human Rights. Pallickal says the Dalit community has progressed much more slowly than the rest of the country.

The biggest problem remains lack of social acceptance of the community. Pallickal hopes businesses like Dalit Foods can make a difference.

"I am looking for a world where I can claim my caste and not be discriminated against," she said.

Chandra Bhan Prasad recently said that his business is a social experiment to see if India has really changed and to find out if people are willing to examine their own biases and customs.

For now, Dalits across India continue to battle social and economic barriers and push for meaningful change.

Ajana Pasricha wrote this story for VOANews. Alice Bryant adapted it for Learning English. George Grow was the editor.

caste - n. one of the classes into which the Hindu people of India were traditionally divided

pickle - n. a cucumber that is preserved in salt water or vinegar

spice - n. a substance (such as pepper or nutmeg) that is used in cooking to add flavor to food and that comes from a dried plant and is usually a powder or seed

prejudice - n. an unfair feeling of dislike for a person or group because of race, sex, religion, etc.

bundle - n. a group of things that are fastened, tied, or wrapped together

superfood - n. a nutrient-rich food considered to be especially beneficial for health and well-being.

affirmative action - n. an action or policy favoring those who tend to suffer from discrimination, especially in relation to employment or education

brutally - adv. done in an extremely cruel or harsh way