Update Required To play the media you will need to either update your browser to a recent version or update your Flash plugin.
By Anne Ball
03 October, 2016

That warning comes from the World Meteorological Organization (WMO). Its scientists are calling for the establishment of an Arctic observatory to help deal with possible dangerous changes resulting from the melting ice.

The WMO believes changes in the Arctic area are likely evidence of a coming disaster. It noted that temperatures around the world continue to rise. 2016 is predicted to be the hottest year since modern record-keeping began 150 years ago.

The Arctic is warming at least two times as fast as the world average, the WMO said. Arctic sea ice now covers 40 percent less area at the height of the summer melt season than it did in the late 1970s and early 1980s. The highest Arctic sea levels in March were said to be the lowest on record. 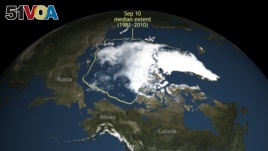 Petteri Taalas is the WMO's Secretary-General. He told VOA that the changes in the climate were having a serious effect on the environment. For example, he said, the tree line in mountain areas is moving upward.

"There are also some species of animals who have difficulties in coping with these changes," Taalas said. These include polar bears, Arctic seals, and even some birds. He said the changing climate will also have an effect on fisheries.

Taalas also warned that the melting of the Arctic's frozen permafrost could release large amounts of greenhouse gases. Those gases are the ones that speed up the rise of temperatures.

But the melting of the Arctic sea ice is also opening up new transportation, travel and exploration possibilities. Taalas said that less ice could cut the time it takes for ships to sail between Europe and East Asia.

Opening the Arctic would also increase the risk of accidents in hazardous waters and oil spills. The cold, undeveloped environment is more difficult to clean up than other areas.

Taalas called for the establishment of an Arctic observatory to study, predict and react to climate change. He said this would keep transportation in Arctic waters safe.

This story was written Lisa Schlein for VOA News. Anne Ball adapted it for Learning English. George Grow was the editor. We want to hear from you. Write to us in the Comments Section and visit us on 51VOA.COM.

permafrost – n. a layer of soil that is always frozen in very cold regions of the world