Update Required To play the media you will need to either update your browser to a recent version or update your Flash plugin.
By Christopher Jones-Cruise
08 October, 2016


British scientists have created what they believe is the best three-dimensional model of a dinosaur ever built.

They say the model is almost the exact the length, width and height of a real dinosaur called a Psittacosaurus.

The Psittacosaurus was a plant-eating creature about the size of a large dog. 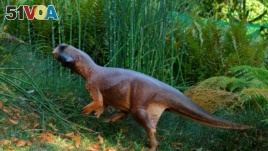 An artist's illustration of Psittacosaurus, a little dinosaur with a parrot-like beak and bristles on its tail that roamed thick forests in China about 120 million years ago is shown in this image released Sept. 15, 2016. (Courtesy Jakob Vinther/Universit

The model has colors and markings that scientists think the creature had when it lived in what is now northern China about 100 million years ago.

Hundreds of dinosaur fossils have been discovered in the area -- including complete remains of some creatures.

The British scientists created their model with help from a fossilized remain that had preserved skin pigment.

Jakob Vinther is with the University of Bristol.

"Getting exceptional preservation and being able to tell colors in a fossil is really unique. Usually you only get the hard parts preserved, such as bone or shell. But under exceptional circumstances we can be lucky and find soft tissues and also these pigments preserved."

The scientists believe the colored markings show that the Psittacosaurus lived in forests with plenty of trees and other plant life. They also believe the dinosaur's markings made it difficult to be seen by other animals who wanted to kill it.

VOA's Deborah Block reported this story from Washington. Christopher Jones-Cruise adapted it for Learning English. George Grow was the editor.

preserved – adj. kept in good condition over a long period of time

skin – n. the natural outer layer of tissue that covers the body of a person or animal

pigment – n. a natural substance that gives color to animals and plants

circumstances – n. the way something happens; the specific details of an event

pattern – n. a repeated form or design especially that is used to decorate something