Update Required To play the media you will need to either update your browser to a recent version or update your Flash plugin.
By Bryan Lynn
10 October, 2016


The European Union has launched a new border force to control the flow of immigrants entering EU member countries.

The new force is called the European Border and Coast Guard Agency. A ceremony marking its creation was recently held at the Kapitan Andreevo border crossing on Bulgaria's border with Turkey.

Europe has received millions of migrants and refugees from the Middle East and Africa in recent years. This has put pressure on many EU members and led to calls to close off the borders.

Dimitris Avramopoulos is the EU's commissioner for migration. He praised the new border force. He notes the force came to exist just nine months after it was first proposed.

"The European citizens have demanded, and they rightly do so, a tangible European response - and today we deliver it collectively."

Permanent employees at the new agency – formerly known as Frontex - will be more than doubled, according to EU officials. At least 1,500 border guards will be ready to quickly deploy to areas experiencing a sharp increase in migrant activity.

Currently, E.U. citizens are permitted to travel freely across borders of 26 countries. But the rising number of refugees and migrants led some nations to reestablish their own border controls. 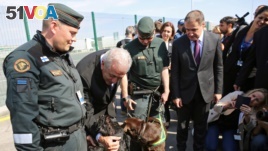 More than 300,000 migrants have arrived in Europe in this year alone -- many passing through Turkey.

Critics of the E.U.'s new border force say wealthy E.U. nations are not doing enough to care for their share of migrants and refugees.

"That needs to shift, and no border guard is going to make that happen. That's going to require political will and some durable solutions..." 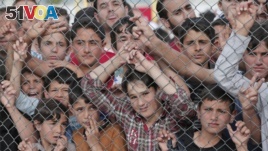 Migrants stand behind a fence at the Nizip refugee camp in Gaziantep province, southeastern Turkey, April 23, 2016.

Flows of migrants from Turkey have decreased since E.U. officials struck a deal with Turkey in March. Under that agreement, Turkey promised to return all migrants who try to enter Europe illegally. But Van Gulik said this is just a way for Europe to outsource its asylum policy.

E.U. officials have said the new border agency will respect human and refugee rights. But they say the force must also be used to help the E.U. regain control of its borders to prevent another crisis.

Henry Ridgwell reported this story for VOANews. Bryan Lynn adapted it for Learning English. George Grow was the editor.

durable – adj. remaining in good condition for a long time

outsource – v. sending work out to be done by another company, often in another country