US: No Rush to Move in Iraq


The United States Defense Department has confirmed that it has received reports from U.S. teams sent to Iraq to examine the military and security situation there. But a department spokesman said that it could take some time before any decision is made about what to do next.

On June 19th, President Obama announced that the U.S. was sending 300 military advisors to Iraq. He said they would support the Iraqi government in its fight against the Islamic State of Iraq and the Levant, or ISIL.

In his speech last month, President Obama also made an appeal to Iraqi Prime Minister Nouri al-Maliki and other Iraqi leaders. He urged them to rise above religious differences and make the government more inclusive. 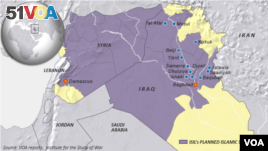 ISIL's planned Islamic state in territory within Iraq and Syria. US says it will support Iraq's government as it fights ISIL.

Since then, the Iraqi parliament has tried three times to elect a new speaker.

On Tuesday, June 15th, the parliament elected Sunni politician Selim al-Jabouri as the new speaker, although there were several attempts to prevent the vote. The conflict over who will be the prime minister continues.

Mr. Maliki hopes to serve a third term. But he faces strong opposition from Sunni lawmakers and from Kurdish and other Shi'ite members of Parliament.

This story was written in Special English by Hai Do from VOA News reports by Jeff Seldin, Edward Yeranian, Henry Ridgewell and Mohamed El-shinnawi. It was narrated by Christopher Cruise. It was edited by Caty Weaver.