Update Required To play the media you will need to either update your browser to a recent version or update your Flash plugin.
By VOA
15 July, 2014

The Israeli military began a campaign of airstrikes in Gaza last week following rocket attacks from the area. At least 190 mostly civilian Palestinians have been killed in the Israeli attacks. Hundreds of homes have been destroyed as well.

On Tuesday, Hamas leaders rejected the Egyptian plan. Some of the group's military leaders said the plan was a "surrender" to Israel. Earlier in the day, the Israeli cabinet accepted the plan. But Israel said it restarted airstrikes six hours after accepting the deal, in answer to 50 rocket attacks from Gaza. The Israeli military said its missile defense system blocked rockets above three cities Tuesday.

Hamas says it was not included in negotiations to end the conflict. The cease-fire called for an end to the attacks, the opening of the borders with Gaza, and talks between Hamas and Israel. The talks were to take place in Egypt within two days. 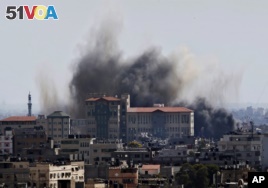 Israeli Prime Minister Benjamin Netanyahu told reporters the Israeli military would increase its attacks if Hamas does not accept a cease-fire.

"If Hamas rejects the Egyptian proposal and the rocket fire from Gaza does not cease -- and that appears to be the case now -- we are prepared to continue and intensify our operation to protect our people."

Talal Okal is a Palestinian newspaper opinion writer. He says the Israeli military operations have helped strengthen support for Hamas.

"For the moment, the popularity of Hamas increased, you know, because the people saw something happen for the first time, you know -- the resistance is ready and able to, to respond, to defend, to do something."

U.S. Secretary of State John Kerry spoke to reporters in Vienna, Austria Tuesday. He criticized Hamas for continuing its rocket attacks on Israel.

"I cannot condemn strongly enough the actions of Hamas in so brazenly firing rockets, in multiple numbers, in the face of a goodwill effort to offer a cease-fire in which Egypt and Israel joined together and the international community strongly supports the idea of a cease-fire, the need, the compelling need to have a cease-fire."

Late Monday, President Obama attended a gathering celebrating the Muslim holy month of Ramadan. He said he was pleased by the Egyptian plan for a cease-fire.

"And I will say very clearly no country can accept rockets fired indiscriminately at citizens. And so we have been very clear that Israel has the right to defend itself against what I consider to be inexcusable attacks from Hamas. At the same time, on top of the humanitarian crisis in Gaza that we've worked long and hard to alleviate, the death and injury of Palestinian civilians is a tragedy, which is why we've emphasized the need to protect civilians regardless of who they are or where they live."

This report was based on a story by VOA reporter Gabe Joselow in Gaza and on stories by Sam Verman, Chris Hannas and Carla Babb in Washington