Update Required To play the media you will need to either update your browser to a recent version or update your Flash plugin.
By VOA
15 July, 2014

Cambodian rights groups said at least 40 people were injured Tuesday in clashes between security guards and protesters in the country's capital, Phnom Penh.

The protesters were demanding the government re-open Freedom Park, the capital's main protest area. The park has been closed since political violence took place there in January.

Rights groups said security officers beat several demonstrators when protesters tried to hang a banner around the park. The demonstrators then beat the security guards. 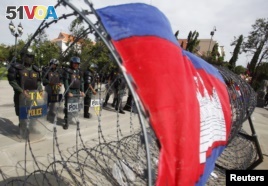 Police used tear gas to break up the protest. They arrested at least three politicians accused of leading the group. Between 200 and 500 people were protesting.

Freedom Park was a special area for demonstrations until the January unrest. At that time, police shot and killed five clothing factory workers who were on strike. Since then, activists said security guards have repeatedly beaten protesters who tried to gather outside the park. Local officials hire the guards.

Cambodia banned public protests after the January unrest. The ban has since been canceled. But protesters said they have had difficulty getting permission for demonstrations.

The Cambodia National Rescue Party, CNRP, organized the Tuesday demonstration. Party members have refused to take their seats in Parliament. They are protesting an election last year that they charged was dishonest.

Cambodian Prime Minister Hun Sen said the election was fair. He has ruled the country since 1985.

This report was based on a story by VOA's William Gallo.