Update Required To play the media you will need to either update your browser to a recent version or update your Flash plugin.
By VOA
16 July, 2014

American soldier Bowe Bergdahl has returned to active duty in the United States Army.  The Taliban in Afghanistan kidnapped and held Sergeant Bergdahl for five years.

An Army spokesman said Monday that Sergeant Bergdahl has completed the final part of the recovery process.  He said the soldier is being sent to a U.S. Army base near San Antonio in the southern state of Texas, where he can, in the spokesman's words, "contribute to the mission."

A U.S. Defense Department spokesman said Sergeant Bergdahl will be doing administrative work.  The Army said an investigation continues into the facts surrounding his disappearance and capture. 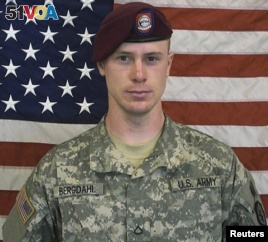 Military officials say he walked away from his base in Afghanistan in 2009. Some of his former military workers say he willingly left his group, or unit.

The Afghan Taliban released the sergeant May 31 in a prisoner exchange.   The U.S. released five Taliban leaders held in U.S. military prison at Guantanamo Bay, Cuba.  The exchange caused intense debate. The Taliban detainees were sent to Qatar. The Qatari government has said it will watch the five men for a year.

Sergeant Bergdahl was examined at a U.S. military hospital in Landstuhl, Germany, after his release. He later was moved to a military hospital at Fort Sam Houston in Texas for treatment.  Reports say he will live in military housing at the base in Texas.

Sergeant Bergdahl's release led to celebration in the United States.  But that turned into a political debate about whether he had left his post and whether the prisoner exchange should have taken place.

This story is based on reports from VOA News and adapted by Mario Ritter.