Update Required To play the media you will need to either update your browser to a recent version or update your Flash plugin.
By Bryan Lynn
02 August 2022

U.S. officials say al-Zawahiri helped al-Qaida's top leader Osama bin Laden plan the September 11 terrorist attacks on the United States. After the attacks, he is believed to have continued to lead al-Qaida. Al-Zawahiri avoided capture by U.S. forces for 21 years.

Officials in the administration of U.S. President Joe Biden recently provided details about the killing to reporters from the Associated Press (AP) and Reuters. The officials spoke about the operation on the condition that they not be named. 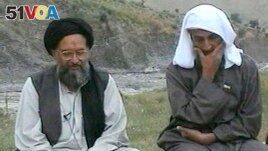 In this television image from Arab satellite station Al-Jazeera, Osama bin Laden, right, listens as his top deputy Ayman al-Zawahri speaks at an undisclosed location, in this image made from undated video tape broadcast by the station April 15, 2002.(AP P

One official said the operation to find and kill al-Zawahiri had been the result of "careful" and "persistent" planning. Before the announcement of his killing, al-Zawahiri was believed to have been living either in Pakistan's tribal area or inside Afghanistan.

Since the U.S. withdrawal from Afghanistan about one year ago, officials had been watching for signs of al-Qaida's presence in the country, the officials said.

This year, officials identified that al-Zawahiri's family – his wife, his daughter and her children – had moved into a safe house in Kabul. They later identified al-Zawahiri at the same house.

Several different methods were used to confirm al-Zawahiri's identity. He was often seen on the balcony of the safe house, officials said. This is where he was targeted in the airstrike. The attack was carried out by an unmanned aircraft, called a drone.

Officials said they had fully investigated the building and identified other people who were living there. Investigators wanted to make sure the U.S. could successfully carry out an operation to kill al-Zawahiri without threatening the building's overall structure. They also sought to reduce the risk to civilians and al-Zawahiri's family, officials said.

In recent weeks, President Biden held meetings with close advisors and cabinet members to examine the available intelligence and come up with the best plan of action. On July 1, Biden was told about a proposed operation in the White House Situation Room. The meeting was attended by top intelligence officials including CIA Director William Burns.

Biden "asked detailed questions about what we knew and how we knew it," one official told Reuters. The U.S. president also closely examined a model of the safe house the intelligence community had built and brought to the meeting.

Biden asked about lighting, weather, building materials and other elements that could affect the success of the operation, the official said. He also requested a report on the expected ramifications of carrying out an airstrike in Kabul.

A group of government lawyers examined the intelligence reporting. They confirmed that al-Zawahiri was a lawful target based on his continuing leadership of al-Qaida.

On July 25, the president gathered his cabinet members and advisors for a final meeting. Officials discussed how killing al-Zawahiri would affect America's relationship with the Taliban, among other issues, the official told Reuters.

After listening to the advice from others in the room, Biden approved "a precise tailored air strike." But the approval was given on the condition that the attack would take measures to reduce the risk of civilian casualties.

The strike was carried out at 0148 UTC on July 30. Officials said a drone fired two so-called "hellfire" missiles at al-Zawahiri while he was on the balcony of the safe house.

The house where al-Zawahiri was living with his family was owned by a top aide to senior Taliban leader Sirajuddin Haqqani, a U.S. intelligence official told the AP.

Experts say they are concerned that the Taliban government may be permitting armed extremist organizations to stay in Afghanistan because no U.S. forces remain in the country.

persistent – adj. continuing over and over again

balcony – n. a small area joined to the wall outside a room on a high level where a person can stand or sit

tailored –adj. describing something made for a particular person