US: Pfizer COVID Shot Appears Effective for Children under 5

Update Required To play the media you will need to either update your browser to a recent version or update your Flash plugin.
By Dan Novak
13 June 2022


American health officials said Sunday that Pfizer's COVID-19 vaccine appears to be safe and effective for children under 5. Children under 5 is the only group not yet able to be vaccinated for the coronavirus in the United States.

The Food and Drug Administration, or FDA, shared its findings of the Pfizer shot ahead of a meeting this coming Wednesday. There, outside experts will vote on whether the shots are ready for the nation's 18 million babies and young children.

Late last week, the FDA published a similar study of Moderna's shots for children under 6. If health officials approve the shots by one or both companies, vaccinations could begin as soon as next week. 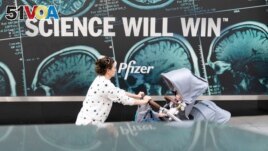 A woman pushes a baby in a stroller past a sign hanging outside Pfizer headquarters in New York, Monday, May 23, 2022. American health officials said Sunday that Pfizer's COVID-19 vaccine appears to be safe and effective for children under 5. (AP Photo/Mary Altaffer)

Some parents have been pressing U.S. officials for months for the chance to protect their smallest children. The pressure has increased as fewer adults are now wearing face coverings or following other public health measures.

In the U.S., only about 3 percent of COVID cases are in the age group of 6 months to 4 years. But the FDA found hospitalization and death rates in that group are higher than those for older children.

The FDA said children who received Pfizer's shots during testing developed high levels of virus-fighting antibodies expected to protect them against the coronavirus. But additional testing showed important differences, with stronger results for Pfizer.

Pfizer's vaccine is given as a three-shot treatment. It appeared 80 percent effective in preventing symptomatic COVID-19, although that was based on just 10 cases found among study participants. The number could change as Pfizer's study continues.

Moderna's two-shot treatment was only about 40 percent to 50 percent effective at preventing milder infections. But the two companies' shots were tested at different times during the pandemic, when different variants were spreading. Moderna has begun testing a third shot for young children.

On Wednesday, the FDA will ask an independent group of vaccine experts to debate both companies' data before voting. The FDA is not required to follow the group's recommendations. But the process is seen as an important step in judging the vaccines.

The FDA is expected to make its official decision shortly after Wednesday's all-day meeting. The next step: the Centers for Disease Control and Prevention, which recommends how to use vaccines, will have its own group of experts to debate which children need vaccinations.

It is not clear how much demand there will be for the shots. A recent study suggests only 1 in 5 parents of young children would get their kids vaccinated right away. And less than a third of those ages 6 to 11 have gotten the two recommended shots, official data says.

Pfizer and its partner BioNTech plan to offer two shots three weeks apart. That would be followed by a third at least two months later. The children's dose is one-tenth the amount given to adults. Pfizer is currently the only company with an approved COVID-19 vaccine for older U.S. children.

Moderna is seeking FDA approval for two shots, each one-fourth of its adult dose. They are given about four weeks apart.

The FDA currently only permits Moderna's vaccine for use in adults. But some countries permit full-size doses for teenagers and half-size shots for kids ages 6 to 11. That is a step the FDA also is considering.

More than 30,000 U.S. children younger than 5 have been hospitalized with COVID-19. There have also been nearly 500 coronavirus deaths in that age group, U.S. health officials say.

symptomatic — adj. relating to or showing symptoms of a disease

recommend — v. to suggest that someone do something