Pfizer: 3 Shots Effective Against COVID-19 in Children under 5

Update Required To play the media you will need to either update your browser to a recent version or update your Flash plugin.
By Bryan Lynn
23 May 2022


Drug companies Pfizer and BioNTech said Monday that three low-dose injections of their COVID-19 vaccine have shown to be effective in protecting children under age five.

The companies made the announcement after carrying out new experiments, or trials, involving the youngest population group. They plan to provide information about the trials to the U.S. Food and Drug Administration, FDA, as soon as this week.

The estimated 18 million children under five are the only Americans who have not yet been approved to receive a COVID-19 vaccine. 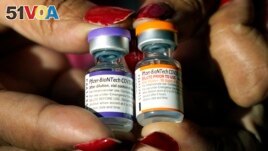 FILE - A nurse holds a vial of the Pfizer COVID-19 vaccine for children ages 5 to 11, right, and a vial of the vaccine for adults, which has a different colored label, at a vaccination station in Jackson, Miss., Tuesday, Feb. 8, 2022. (AP Photo/Rogelio V. Solis, File)

Pfizer and BioNTech have said the amount of vaccine used in their shots for children under five is much less – about one-tenth lower – than the amount used in injections for adults.

In earlier trials, researchers for the companies said two shots did not seem quite strong enough to effectively protect young children. So they decided to give a third shot to more than 1,600 individuals aged six months to four years. The new trial was carried out during last winter's spread of the Omicron version of COVID-19.

In a statement released Monday, Pfizer and BioNTech said the extra shot increased levels of virus-fighting antibodies in the youngest age group. The companies said the levels meet FDA requirements for emergency approval of the vaccine.

Pfizer and BioNTech said early data suggests the three-shot series is more than 80 percent effective in preventing symptomatic COVID-19. However, they noted that those results were based on just 10 symptomatic cases identified through April 29.

For the study to be complete, researchers need at least 21 cases to make a final declaration of effectiveness. Pfizer and BioNTech promised to share the additional data when it is available.

The companies said the vaccine was generally well-received among trial subjects, with only mild side effects reported.

It remains unclear how many U.S. parents will vaccinate their children in the youngest age group. COVID-19 is generally milder in children than adults. And only about 29 percent of five to 11-year-olds in the country have received vaccinations.

The FDA is also planning to examine data provided by competing vaccine maker Moderna for children under the age of six. A group of FDA advisors is set to meet next month to consider use of the two vaccines designed for younger people.

Moderna released trial data in March showing that its vaccine was safe and provided a similar immune system reaction in children as it did in adults.

dose – n. the amount of a medicine, drug or vitamin that is taken at one time
symptom – n. a change in the body or mind which indicates that a disease is present
mild – adj. not severe
immune system – n. the cells and tissue in the body that fight against infection