Use of Medication to End Pregnancies Is Rising

Update Required To play the media you will need to either update your browser to a recent version or update your Flash plugin.
By Dan Novak
07 May 2022


A group that supports abortion rights says that drugs are used to carry out more than half of the abortions in America rather than operations.

The Guttmacher Institute, a non-profit research group, said earlier this year that the percentage has been increasing yearly.

The drugs are taken in the form of pills to medically end pregnancies. 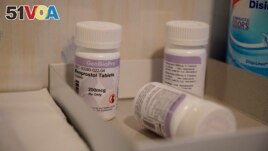 Bottles of the drug misoprostol sit on a table at the West Alabama Women's Center on Tuesday, March 15, 2022. (AP Photo/Allen G. Breed)

Recent federal regulations permit women, who live in states where abortion is restricted, to receive abortion pills across state lines.

One woman from the state of South Dakota told The Associated Press she had to take two trips across state lines to get abortion pills last year.

The woman did not want to release her name. She said the pills permitted her to end an unexpected and high-risk pregnancy.

An opinion from the U.S. Supreme Court leaked this week suggested that it would permit individual states to ban abortion. And anti-abortion activists and politicians say cross-border trips, online doctors visits and mail-delivery pills are what they will try to stop next.

"Medication abortion will be where access to abortion is decided," said Mary Ziegler. She is a professor at Florida State University College of Law. Ziegler specializes in reproductive rights. "That's going to be the battleground that decides how enforceable abortion bans are."

Use of abortion pills has been rising in the U.S. since 2000. That year, the U.S. Food and Drug Administration (FDA) approved mifepristone. It is the main drug used in medication abortions.

The FDA removed a requirement that women receive abortion pills in person during the COVID-19 pandemic last year. Mail delivery is also now permitted across the country.

Those changes have helped create online services that offer information on getting abortion pills and appointments to get a prescription.

The unidentified woman in South Dakota first found that the state's only abortion clinic could not accept her in time for a medication abortion. She was able to find an online service that advised her to drive to Minnesota for a phone call with a doctor. A week later, she went back to Minnesota for the pills.

South Dakota is among several states in which Republican lawmakers and leaders have moved to place restrictions on abortion pills in recent months. Other states include Texas, Kentucky, Arkansas, Ohio, Tennessee and Oklahoma. The AP reports that 19 states require a medical professional to be physically present when abortion pills are given to a patient.

Besides crossing state lines, women can also go to internationally-based online pharmacies, said Greer Donley. She is a professor at the University of Pittsburgh Law School. Some women are also having pills sent through states without restrictions.

"It's going to be much harder for states to control abortion access," Donley said. "The question is how is it going to be enforced?"

Sue Leibel is with the Susan B. Anthony List, an organization opposed to abortion. She said it is an issue that is gaining in importance to Republican state lawmakers.

"This is a new frontier and states are grappling with enforcement mechanisms," she said.

Abortion opponents say they do not want to bring legal action against women who seek abortions.

Instead, Leibel suggested the next target for state enforcement should be the pharmacies, organizations and clinics that provide the abortion pills. She also said abortion-rights opponents should place importance on electing a presidential candidate who could work to change the FDA's policy.

But, Donley, the law school professor, is worried that state lawmakers may seek to take legal action against the women who get the pills.

"Many anti-abortion legislators might realize the only way to enforce these laws is to prosecute the pregnant person themselves," she said.

abortion – n. a medical procedure used to end a pregnancy and cause the death of the fetus pills

prescription –n. a written message from a doctor that officially tells someone to use a medicine, therapy

clinic –n. a place where people can get medical treatment

pharmacy –n. a store where people prescription drugs are sold

frontier — n. the limits of knowledge in a particular field

grapple — v. to struggle with something