Study of Cancer Genetics to Help with Targeted Treatment

Update Required To play the media you will need to either update your browser to a recent version or update your Flash plugin.
By John Russell
03 May 2022


Scientists have studied the full genetic information of more than 18,000 cancer samples. They found new information about the patterns of mutations, or changes, that could help doctors provide better treatment.

Their study, which appeared recently in the publication Science, is not the first to do such a complete genetic study of cancer samples. But no one has ever used such a large sample size.

Serena Nik-Zainal of the University of Cambridge was part of the team that did the research. She said this was "the largest cohort in the world. It is extraordinary." 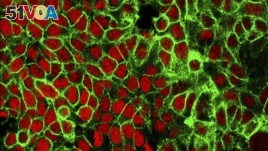 This microscope image made available by the National Cancer Institute Center for Cancer Research shows human colon cancer cells with the nuclei stained red. Cancer is a disease of the genome that occurs when changes in a person's DNA cause cells to grow and divide.

Over 12,000 samples in the study came from patients recruited by Britain's National Health Service. They were part of a project to study whole genomes from people with common cancers and rare diseases. The rest of the data came from existing cancer data sets.

Researchers were able to study such a large number because of the same improvements in technology that recently permitted scientists to complete the map of the entire human genome.

Andrew Futreal, a genomic expert at MD Anderson Cancer Center in Houston, was not involved in the study. He said the study gives scientists some knowledge of the destructive forces that cause cancer.

Cancer is a disease of the genome or full set of instructions for running cells. It happens when changes in a person's DNA cause cells to grow and divide uncontrollably. DNA is a substance that carries the genetic information in the cells of living things, like a human. In 2020, there were about 19 million new cancer cases worldwide.

For the study, researchers looked at 19 different kinds of cancer in the human body. It identified 58 new "mutational signatures," or pieces of evidence leading to the causes of cancer. Nik-Zainal said researchers also confirmed 51 of more than 70 previously reported mutation patterns. Some arise because of problems within a person's cells; others are caused by ultraviolet radiation, tobacco smoke, or chemicals.

Knowing more of them "helps us to understand each person's cancer more precisely," which can help guide treatment, Nik-Zainal said.

Genetic sequencing, the process used to study the makeup of a cell, is already being included in cancer care. It is part of the growing move toward personalized medicine, or care based on a patient's genes and specific disease. Now doctors will have much more information to draw from when they look at individual cancers.

To help doctors use this information, researchers developed a computer program that will let them find common mutation patterns and seek out rare ones. Nik-Zainal said doctors could suggest a treatment based on a special pattern.

Futreal said the data can also show doctors what tends to happen over time when a patient develops a cancer with a certain mutation pattern. This will help doctors give earlier treatment and hopefully stop the developing disease.

Laura Ungar reported on this story for the Associated Press. John Russell adapted it for VOA Learning English.

sample – n. a group of people or things that are taken from a larger group and studied, tested, or questioned to get information

pattern – n. the regular and repeated way in which something happens

cohort – n. a group of individuals having something (usually a statistical factor) in common in a study

genome – n. the complete set of genes in a cell or organism

DNA – n. a substance that carries genetic information in the cells of plants and animals