Update Required To play the media you will need to either update your browser to a recent version or update your Flash plugin.
By Dan Novak
20 October 2021


Doctors have successfully attached a kidney from a genetically engineered pig to a human body. The organ worked normally giving hope that it could be a major step forward to solve the shortage of human organs for transplant.

The operation was done at New York University's Langone Health in New York City. The pig's genes were changed so that it no longer contained a molecule known to cause almost immediate rejection by the human body.

The patient was brain-dead and had signs of kidney problems. Her family agreed to the experiment before she was scheduled to be taken off of life support.

For over two days, the kidney was attached to her blood vessels. It was kept outside her body so researchers could observe it. The kidney did what it was supposed to do — filter waste and produce urine. And the body did not reject it.

"It had absolutely normal function," said Dr. Robert Montgomery, who led the operation last month at NYU Langone Health. He told The Associated Press, "It didn't have this immediate rejection that we have worried about."

This research is "a significant step," said Dr. Andrew Adams of the University of Minnesota Medical School who was not part of the team.

The dream of animal-to-human transplants goes back to the 17th century when scientists tried unsuccessfully to use animal blood for transfusions. By the 20th century, doctors were attempting transplants of organs from baboons into humans. Baby Fae, a dying infant, lived 21 days with a baboon heart in 1984.

Scientists have since turned from baboons to pigs. Pigs are produced for food, so using them for organs raises fewer ethical concerns.

Pig heart valves have been used successfully for many years in humans. Skin grafts have been used to help burn victims. And Chinese scientists have used pig corneas to restore eyesight.

But researchers have struggled with how to prevent immediate rejection of pig organs by the human body. 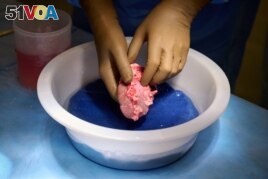 A genetically engineered pig kidney is cleaned and prepared for transplantation to a human at NYU Langone in New York, U.S., in this undated handout photo. (Joe Carrotta for NYU Langone Health/Handout via REUTERS)

Montgomery's team had the idea that removing a pig gene that produces a sugar molecule called alpha-gal would solve the problem. The genetically changed pig is called GalSafe. It is developed by Revivicor of the United Therapeutics Corporation.

The U.S. Food and Drug Administration (FDA) approved the process in December 2020 for possible use in medicine as well as food.

Some scientists are researching whether GalSafe pigs can be used for heart and skin needs. Organs developed from the pigs, however, would still require specific FDA approval before being used in humans, the agency said.

The experiment could lead to transplants

Montgomery said the successful NYU kidney transplant experiment should lead to trials in patients with serious kidney problems. The pig kidney could be used as a temporary solution until a human kidney becomes available. Or it could be tested as a permanent fix.

The current experiment was only in place for a short time. Montgomery added that any future trials could likely bring new problems that will need to be solved.

The United Network for Organ Sharing says nearly 107,000 people are currently waiting for organ transplants in the U.S. More than 90,000 are waiting for a kidney. It can take three to five years for patients to find a kidney transplant.

Karen Maschke is a researcher at the Hastings Center. She helps develop ethics and policy guidance for the trials with support from the National Institutes of Health.

She said raising pigs to be organ donors feels wrong to some people. But it may grow more acceptable with consideration for their well-being.

"The other issue is going to be: Should we be doing this just because we can?" Maschke said.

Dan Novak adapted this story for VOA Learning English based on reporting from Reuters and The Associated Press. Hai Do was the editor.

transplant — v. to perform a medical operation in which an organ or other part that has been removed from the body of one person is put into the body of another person

urine — n. waste liquid that collects in the bladder before leaving the body

transfusion — n. a medical treatment in which someone's blood is put into the body of another person

valve — n. a mechanical device that controls the flow of liquid, gas, etc., by opening and closing

skin graft — n. a piece of skin that is attached to a part of the body to repair a damaged area

cornea — n. the clear outer covering of the eyeball