US Health Agency Pushes for Less Salt in Food

Update Required To play the media you will need to either update your browser to a recent version or update your Flash plugin.
By Dan Friedell
17 October 2021


The Food and Drug Administration asked food companies to use less salt in more than 150 items as a way to make Americans healthier.

The agency targeted manufacturers that sell foods made from grains as well as potato chips and french fries.

A total of 163 items made the list. The FDA said the extra sodium people eat – sodium is the chemical name for salt – mostly comes from foods made or eaten away from home. 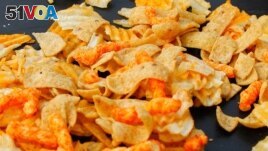 The FDA suggested that food companies slowly reduce the amount of salt they add to their products. In doing so, Americans can get used to eating less salt. The agency called for a gradual reduction of 12 percent over the next two-and-a-half years. If the companies agree, it will reduce the average American's sodium intake from 3,400 to 3,000 milligrams per day. The FDA suggests people over the age of 14 take in only 2,300 milligrams per day, but the goal is to reduce the sodium over time.

Susan Mayne leads the FDA's food safety and nutrition division. She said the gradual reduction should reduce negative feedback from food makers and those who buy their products.

Some health experts, however, criticized the agency for not producing a full 10-year timeline for sodium reduction.

Dr. Dariush Mozaffarian leads Tufts University's school of Nutrition Science and Policy. He said two recent studies suggest the FDA should be firmer with its guidelines.

A 2019 study from the National Academies of Sciences, Engineering, and Medicine showed that less sodium reduced some long-term health problems. Another recent study in China showed people who used a salt substitute reduced their chances of stroke and heart problems compared to those who used regular salt.

Mozaffarian said the effect of the sodium guidelines will depend on how well the FDA monitors food companies and their progress.

Some business organizations, such as the American Frozen Food Institute, said they are already offering products with less sodium.

Right now, the guidelines are voluntary, but if food makers do not make changes in time, the leader of one organization thinks the sodium cuts should be required.

Dr. Peter Lurie is president of the Center for Science in the Public Interest. If food makers do not show a willingness to reduce the salt in their products, it could be that "mandatory cuts are on the table," he said.

What are you doing to reduce the amount of salt in your diet? Tell us in the Comments Section and visit 51VOA.COM.

gradual – adj. moving or changing in small amounts : happening in a slow way over a long period of time

intake – n. the amount of something (such as food or drink) that is taken into your body

nutrition – n. the process of eating the right kind of food so you can grow properly and be healthy

monitor – v to watch, observe, listen to, or check (something) for a special purpose over a period of time