Update Required To play the media you will need to either update your browser to a recent version or update your Flash plugin.
By John Russell
05 May 2021


Small businesses across America are putting up "Help Wanted" signs and other advertisements seeking workers.

But in many cases, the jobs go unfilled even as the economy improves.

The lack of workers is hurting small businesses' ability to keep up with demand for their products and services. 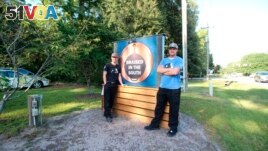 FILE - This photo provided by Hannah Albert on Sept. 23, 2020 shows Steve Klatt, left, and Brandon Lapp, owners of Braised in the South, a Johns Island, S.C, restaurant and food truck business that is having trouble finding workers during the pandemic.

Owners say that some possible job candidates are not seeking employment because they worry about getting COVID-19. Others choose to continue with the increased unemployment benefits linked to the health crisis. Still others face childcare needs. Many parents are unable to work if they also must care for a child at home.

Steve Klatt and Brandon Lapp own a restaurant and food truck business in Johns Island, South Carolina. When Klatt and Lapp set up interviews, or meetings with job candidates, they say they are lucky if one out of 10 of them attends.

"The people who do show up, all assume their unemployment is running out," says Klatt.

Unemployment refers to assistance that people can receive when they lose their job.

Congressional Research Services, a research group for the U.S. Congress, notes that there are many state and federal rules that govern unemployment assistance.

"This results in ... 53 different programs" in the United States, says a 2019 report. It adds that "most states provide up to a maximum of 26 weeks of" unemployment benefits.

In South Carolina, the maximum, or highest permitted, weekly unemployment benefit is $626, including $300 in federal coronavirus aid payments. But in other states, maximum unemployment is more than $700 a week.

Businesses of all sizes are struggling with hiring even with almost 10 million Americans unemployed. But smaller companies have a harder time. They cannot offer the same pay and benefits that larger companies do.

The National Federation of Independent Business found recently that 42 percent of its members had job openings they could not fill. Owners believe this issue could be a result of higher unemployment benefits.

Companies whose work is done inside homes find many possible workers are afraid of getting the virus on a job. Meanwhile, demand for home services is up because people are spending more time at home.

Joe Brusuelas is an economist with the consulting company RSM. Brusuelas says child care is another issue that may increase owners' problems with finding workers.

He said that small businesses especially are going to face labor difficulties "until later this fall at the earliest."

Child care is one reason why the amount of available workers has decreased at Let Mommy Sleep, which hires nurses and other caregivers. These employees provide in-home care for babies. Founder Denise Stern says some of her caregivers work overnight and sleep during the day. But that shift is now impossible for those who must care for their own children during the day.

Stern's hiring process is also restricted by concerns about the virus itself.

"We can't hire candidates with second jobs where exposure might happen, and honestly, a lot of candidates don't want to work in a closed environment where we know transmission happens," Stern says.

Stern has had to reject some requests for service. So have the owners of seven Let Mommy Sleep centers around the country. Stern, who works in the Washington, D.C., area, says her company's earnings dropped 50 percent.

Joyce M. Rosenberg reported on this story for the Associated Press. John Russell adapted it for Learning English. Caty Weaver was the editor.

benefit – n. money that is paid by a company (such as an insurance company) or by a government when someone dies, becomes sick, stops working, etc.