What Happens When Women Run the Economy?

Update Required To play the media you will need to either update your browser to a recent version or update your Flash plugin.
By Susan Shand
14 April 2021


Women now have many of the jobs controlling the world's largest economy. And they are trying to fix it.

This change may already be affecting economic policy. A new $2.3 trillion spending plan was introduced by Biden last week. It includes $400 billion to finance the "care economy," which supports home- and community-based jobs taking care of children and older people. This part of the economy involves work usually done by women and has largely been ignored for many years.

Biden's spending plan also includes hundreds of billions of dollars more to fix racial inequalities, as well as inequalities between rural Americans and those living in cities.

"In the end, it might be that this bill makes 80 years of history: it begins to fix the structural problems," Yellen wrote on Twitter. She added: "This is just the start for us."

"When you're different from the rest of the group, you often see things differently," said Rebecca Henderson. She is a professor at Harvard Business School and published a book called Reimagining Capitalism in a World on Fire.

"We're in a moment of enormous crisis. We need new ways of thinking," Henderson added.

Over the past 50 years, many women have been presidents or prime ministers of their countries. Few women, however, have been in positions to make powerful decisions about the economy. 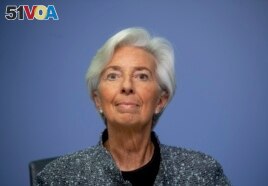 FILE -- In this Thursday, March 12, 2020 file photo the President of European Central Bank Christine Lagarde looks up prior to a press conference following a meeting of the ECB governing council in Frankfurt, Germany.

Outside the United States, Christine Lagarde runs the European Central Bank with its 2.4 trillion euro balance sheet. Kristalina Georgieva is at the International Monetary Fund (IMF), while Ngozi Okonjo-Iweala leads the World Trade Organization. Ten years ago, all those jobs were held by men.

The limited measures available suggest that women have a better record of managing through crises.

"When women are involved, the evidence is very clear: communities are better, economies are better, the world is better," Georgieva said in January. She was speaking about research done by the IMF and other economic organizations.

Women make up less than 2 percent of chief executive officers at financial companies and agencies and less than 20 percent of executive board members. However, IMF research shows that having women in charge often helps keep financial organizations out of crisis.

It is also important to note that the worldwide recession from the coronavirus pandemic has affected women much harder than men.

Women make up 39 percent of workers worldwide, but they accounted for 54 percent of overall job losses, a recent study by McKinsey showed. Bringing these women back to work could increase gross domestic product (GDP) in many nations by up to 27 percent.

Tai is the first woman of color to lead the U.S. Trade Representative's office. She has told her employees to think about diversity and to reach out to long ignored parts of the country.

Okonjo-Iweala is also the first African to head the World Trade Organization (WTO). In 2019, the WTO managed trade of nearly $19 trillion.

"The lesson for us is (to) make sure ... that we don't sink into business as usual," Okonjo-Iweala told Reuters. "It's about decent work for ordinary people," she said.

The Reuters News Agency reported this story. Susan Shand adapted it for Learning English. Bryan Lynn was the editor.

manage – v. to have control of something, such as a business, department, organization, etc.

decent – adj. of a satisfactory quality or level