Update Required To play the media you will need to either update your browser to a recent version or update your Flash plugin.
By Anna Matteo
29 June 2020

Much of the world is watching and waiting for researchers to develop a vaccine for the disease COVID-19. But making enough of the vaccine to end the coronavirus health crisis will be the biggest medical manufacturing feat in history. 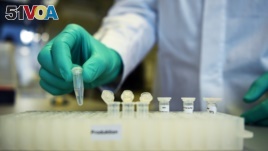 That work has started.

Researchers are currently setting up testing, involving 10,000 to 30,000 volunteers for every candidate vaccine. These scientists say they hope to get an answer on whether a vaccine works by as early as this October.

However, health officials face a hard reality. The developer of an effective vaccine may not be able to make and deliver billions of doses all at once.

The Reuters news agency spoke with over 10 vaccine developers and suppliers.

The U.S. government has partnered with Johnson & Johnson on a $1 billion investment to speed up development and production of its vaccine, even before it is proven to work. Johnson & Johnson signed a deal with two other businesses, Emergent Biosolutions and Catalent, to manufacture large amounts in the United States. Catalent will also do some fill-and-finish work.

"Never in history has so much vaccine been developed at the same time - so that capacity doesn't exist," said Paul Stoffels. He is the chief scientific officer at Johnson & Johnson. He said he believes that filling capacity is the main limiting factor.

Seth Berkley is head of GAVI, the vaccines alliance. He told Reuters that experts estimate having "one to two billion doses of vaccine in the first year, spread out over the world population." He added that it is unlikely to go straight from having zero vaccines to having enough doses for everyone.

GAVI is a project of the Bill and Melinda Gates Foundation. Its aim is to increase the availability of vaccines -- and immunization rates -- in developing countries.

Colonel Nelson Michael is the director of the U.S. Army's Center for Infectious Disease Research. He is working on a government project aimed at delivering a COVID-19 vaccine to the world by January 2021. Michael says that companies usually have years to develop vaccines. "Now," he said, "they have weeks."

But one of the biggest issues is an untested supply chain: How to get the vaccine to people around the world? Any problem in the supply chain could delay or even wreck the whole process. And there could be other problems.

In other words, logistics – the term for organizing a complex operation such as this -- is a major concern.

"This is the biggest logistical challenge the world has ever faced," said Toby Peters. He is an engineering and technology expert with Britain's Birmingham University.

Peters told Reuters, "We could be looking at vaccinating 60% of the (world's) population."

Companies and governments must improve machines to be able to fill that demand. Currently there are not enough machines that can fill and package the vaccines for delivery.

Once ready for shipping, many vaccines need to be kept very cold. Some of the more promising vaccines are made from genetic material -- such as messenger RNA, or mRNA vaccines.

"People who work with mRNA store it at minus 80 degrees centigrade," said Paul Offit, a co-inventor of the rotavirus vaccine. He noted that such conditions are not available at most doctor's offices. He is a doctor and directs the Vaccine Education Center at the Children's Hospital of Philadelphia.

Peters of Birmingham University has been gathering information from poorer countries in Africa and Asia. He said that breaks in the temperature-controlled supply chain are already happening.

Companies such as Moderna are working to make candidate vaccines that remain stable at higher temperatures. Colleen Hussey is a spokesperson for Moderna. She told Reuters that for a short amount of time, these vaccines can be stored in refrigeration equipment found in doctors' offices or medical centers.

deliver – v. to transfer possession of (property) to another : put into the possession or exclusive control of another

supply chain – n. supply chain is a system of organizations, people, activities, information, and resources involved in supplying a product or service to a consumer

package– n. a box or large envelope that is sent or delivered usually through the mail or by another delivery service : – v. to put (something) in a package in order to sell it or send it somewhere