Update Required To play the media you will need to either update your browser to a recent version or update your Flash plugin.
By Trung Nguyen
27 October, 2015


Critics complain that children of Communist Party members in Vietnam have been elected to high-level positions in the government.

The elections have started a fierce debate on social media across the country about "princelings." Princelings are the name given to children of high-level government and party officials. 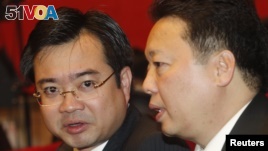 The sons of Prime Minister Nguyen Tan Dung were newly elected, Vietnamese media reported. The older son, Nguyen Thanh Nghi, is one of the youngest provincial party chiefs in Vietnam. He is 39 years old. The younger son, Nguyen Minh Triet, 25, was also selected to be a member of the party committee of Binh Dinh province.

Facing such strong criticism, government officials quickly responded. They said that these elections followed "guidelines and procedures" and were a "positive move."

Truong Duy Nhat is a blogger who spent two years in prison, from 2013 to 2015, for criticizing the Vietnamese government. He said that a sudden rise of young officials with no experience shows an unhealthy change in the country's politics.

"It is not clear that these people would not have been elected if they were not the children of high-level officials."

"The public should be pleased but instead they are outraged, as it is an unfair... process," Mr. Nhat added. As a result, he said, the public "loses trust in the authorities."

Pham Chi Dung studies current events in Vietnam. He says that the rise of these so-called princelings shows fighting within the Communist Party. He also said Vietnam's history shows that if the political situation is healthy, officials "feel no need of pushing their children to different positions."

The new Vietnamese officials could not be reached for comment. But Nguyen Xuan Anh did make a statement. He is the newly-elected party chief of the central city of Da Nang. He said that he was under a lot of pressure to take the new job. Mr. Anh is the son of Nguyen Van Chi, a former member of the Politburo of the Communist Party.

In addition, one statement claims the prime minister's older son said "family tradition and personal effort" helped his rise in the party.

This development comes as the Vietnamese Communists get ready for their 12th party congress in early 2016. That gathering is expected to select the country's next top leaders.

What do you think about political dynasties, or families that dominate the ruling class? Tell us in the Comments section or on 51VOA.COM.

Trung Nguyen reported and wrote this story for VOA news. Pete Musto adapted it for Learning English. Kathleen Struck was the editor.

provincial – adj. of, relating to, or coming from any one of the large parts that some countries are divided into

guideline(s) – n. a rule or instruction that shows or tells how something should be done

procedure(s) - n. an established or accepted way of doing something

blogger – n. a person who writes for a Web site about personal opinions, activities, and experiences

authorities – n. people who have power to make decisions and enforce rules and laws