Vitamins are Important to Good Health

Update Required To play the media you will need to either update your browser to a recent version or update your Flash plugin.
By Brianna Blake
22 April, 2013

This is SCIENCE IN THE NEWS, in VOA Special English. I'm Bob Doughty.

And I'm Faith Lapidus. This week, we tell about vitamins.

Many jobs must be done with two people. One person takes the lead. The other helps. It is this cooperation that brings success. 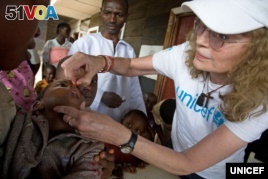 UNICEF Goodwill Ambassador Mia Farrow gives a child a dose of vitamin A, to help boost immunity, during a UNICEF-sponsored immunization Goma, capital of North Kivu Province.
So it is with the human body. Much of our good health depends on the cooperation between substances. When they work together, chemical reactions take place smoothly. Body systems are kept in balance.

Some of the most important helpers in the job of good health are the substances we call vitamins.

The word "vitamin" dates back to Polish scientist Casimir Funk in 1912. He was studying a substance in the hull that covers rice. This substance was believed to cure a disorder called beriberi.

Funk believed the substance belonged to a group of chemicals known as amines. He added the Latin word "vita," meaning life. So he called the substance a "vitamine" -- an amine necessary for life.

Funk was not able to separate the anti-berberi substance from the rice hulls. It was later shown to be thiamine. Other studies found that not all vitamines were amines. So the name was shortened to vitamin. But Funk was correct in recognizing their importance.

Scientists have discovered thirteen kinds of vitamins. They are known as vitamins A, the B group, C, D, E and K. Scientists say vitamins help to carry out chemical changes within cells. If we do not get enough of the vitamins we need in our food, we are at risk of developing a number of diseases.

This brings us back to Casimir Funk. His studies of rice were part of a long search for foods that could cure disease.

One of the first people involved in that search was James Lind of Scotland. In the 1740s, Lind was a doctor for the British Navy. He was investigating a problem that had existed in the Navy for many years.

The problem was the disease scurvy. So many sailors had scurvy that the Navy's fighting strength was very low. The sailors were weak from bleeding inside their bodies. Even the smallest wound would not heal. Doctor Lind thought the sailors were getting sick because they failed to eat some kinds of foods when they were at sea for many months.

Doctor Lind separated 12 sailors who had scurvy into two groups. He gave each group different foods to eat. One group got oranges and lemons. The other did not. The men who ate the fruit began to improve within seven days. The other men got weaker. Doctor Lind was correct. Eating citrus fruits prevents scurvy.

Other doctors looked for foods to cure the diseases rickets and pellagra. They did not yet understand that they were seeing the problem from the opposite direction. That is, it is better to eat vitamin-rich foods to prevent disease instead of eating them to cure a disease after it has developed.

Which foods should be eaten to keep us healthy? Let us look at some important vitamins for these answers.

Vitamin A helps prevent skin and other tissues from becoming dry. It is also needed to make a light-sensitive substance in the eyes. People who do not get enough vitamin A cannot see well in darkness. They may develop a condition that dries the eyes. This can result in infections and lead to blindness.

Vitamin A is found in fish liver oil. It also is in the yellow part of eggs. Sweet potatoes, carrots and other darkly colored fruits and vegetables contain substances that the body can change into vitamin A.

Vitamin B-one is also called thiamine. Thiamine changes starchy foods into energy. It also helps the heart and nervous system work smoothly. Without it, we would be weak and would not grow. We also might develop beriberi.

Thiamine is found not just in whole grains like brown rice, but also in other foods. These include beans and peas, nuts, and meat and fish.

Another B-vitamin is niacin. It helps cells use food energy. It also prevents pellagra -- a disease that causes weakness, reddish skin and stomach problems. Niacin is found in meat, fish and green vegetables.

Vitamin B-12 is needed so folic acid can do its work. Together, they help produce red blood cells. Vitamin B-12 is found naturally in foods like eggs, meat, fish and milk products. Folic acid has been shown to prevent physical problems in babies when taken by their mothers during pregnancy.

Vitamin B-12 is found in green leafy vegetables and other foods, like legumes and citrus fruits. In some countries, it is added to products like bread.

In 2003, Japanese researchers identified a substance they think is a member of the B-vitamin group. It is called pyrroloquinoline quinone, or PQQ.

The researchers found that PQQ is important in the reproductive and defense systems of mice. They said the substance is similarly important for people. PQQ is found in fermented soybeans and also in parsley, green tea, green peppers and kiwi fruit. Other researchers have disputed the Japanese findings. They say more information is needed to confirm them.

Vitamin C is needed for strong bones and teeth, and for healthy blood passages. It also helps wounds heal quickly. The body stores little vitamin C. So we must get it every day in foods such as citrus fruits, tomatoes and uncooked cabbage.

Vitamin D increases levels of the element calcium in the blood. Calcium is needed for nerve and muscle cells to work normally. It also is needed to build strong bones.

Vitamin K is needed for healthy blood. It thickens the blood around a cut to stop bleeding. Bacteria in the intestines normally produce vitamin K. It can also be found in pork products, liver and in vegetables like cabbage, kale and spinach.

Experts agree that everyone needs vitamins so that their bodies can operate normally. In general, a complete diet should provide all the vitamins a body needs in their natural form. In addition, many foods and food products now have extra vitamins and minerals added.

Some people fear they do not get enough vitamins from the foods they eat. So they take products with large amounts of vitamins. They think these products, called vitamin supplements, will improve their health and protect against disease. Many adults now take vitamin supplements every day.

In 2006, medical experts gathered near Washington, D.C. to discuss studies about vitamin supplements. The experts reported finding little evidence that most supplements do anything to improve health. But they noted that some do help to prevent disease.

The experts said women who wish to become mothers should take folic acid to prevent problems in their babies. And, they said vitamin D supplements and calcium can protect the bones of older women.

The medical experts agreed with doctors who say that people who know they lack a vitamin should take vitamin supplements. Some older adults, for example, may not have enough vitamin B-twelve. That is because, as people get older, the body loses its ability to take it from foods.

The experts also noted that taking too much of some vitamins can be harmful. They said people should be sure to discuss what vitamins they take with their doctors.

Several studies have not been able to show that taking vitamin supplements in addition to a balanced diet helps to prevent disease. One study found that older Americans do not get enough Vitamin C and required minerals. The study involved more than six thousand individuals. More than half of them took vitamin supplements.

Vitamins are important to our health. A lack of required vitamins can lead to health problems.

Different vitamins are found in different foods -- grains, vegetables and fruits, fish and meat, eggs and milk products. And even foods that contain the same vitamins may have them in different amounts. Experts say this is why it is important to eat a mixture of foods every day, to get enough of the vitamins our bodies need.

This SCIENCE IN THE NEWS program was written by Brianna Blake. I'm Faith Lapidus.

And I'm Bob Doughty. Join us again next week for more news about science in Special English on the Voice of America.
Related Articles
go top