Update Required To play the media you will need to either update your browser to a recent version or update your Flash plugin.
By VOA
05 November, 2015


The price of Volkswagen AG shares dropped Wednesday as a scandal about its truthfulness continued.

The German car maker said its emissions testing scandal was much bigger than previously believed.

The German automaker said Tuesday it lied about carbon dioxide emissions from its cars. It said it gave wrong information to regulators. This could affect about 800,000 more cars and cost at least an extra $2 billion, reported the Wall Street Journal. 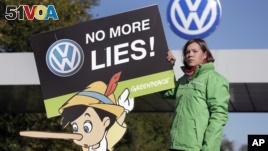 An activist with the environmental group Greenpeace protests Volkswagen emissions rigging. She stands outside a VW factory in Wolfsburg, Germany.

The Wall Street Journal reported that VW shares were down 8.4 percent after the market opened in Frankfurt. They fell 9 percent within 25 minutes of trading. Shares of Porsche Automobil Holding SE, a controlling shareholder of VW, fell 8 percent.

Volkswagen is Europe's largest automaker. The company did not say which cars were affected, reported the Wall Street Journal. Industry analysts said cars sold in Europe were probably affected.

The U.S. government said Monday that VW cheated on emissions tests. The Associated Press reported that VW placed software in about 10,000 cars that reported false levels of pollution.

The cars give off up to nine times more pollution than the amount allowed by the EPA. The EPA is a federal agency that focuses on protecting the environment.

The new report is another blow to VW. In September, the German automaker admitted that up to 11 million cars globally could have the misleading devices.

Volkswagen has reorganized top executives since the scandal emerged. The company said it contacted government agencies to fix the situation, reported the Wall Street Journal.

"Volkswagen would do well to immediately and completely disclose all people and products in this deception, no matter how far-reaching," said Karl Brauer, a senior analyst for Kelley Blue Book, a well-known car valuation and research service.

The U.S. National Highway Transportation Safety Administration imposed a $200 million fine on Takata for failing to warn the public and government about the defective airbags. This was the largest civil penalty in the agency's history.

Honda Motors, Takata's biggest client, said it would no longer buy airbags from the company, just hours after the announcement.

Eight people have been killed and more than 100 others injured by airbags that didn't work properly. The airbags exploded instead of inflated during accidents. All the accidents happened in cars made by Honda.

The defective airbags caused a recall of millions of cars globally, including 19 million in the U.S.

Richard Green and Kenneth Schwartz reported part of this story for VOANews.com. Mary Gotschall adapted this story for Learning English. Kathleen Struck was the editor.

scandals – n. an occurrence in which people are shocked and upset because of behavior that is morally or legally wrong

emissions – n. the act of producing or sending out something (such as energy or gas) from a source

regulators – n. an official who works for the part of the government that controls a public activity (such as banking or insurance) by making and enforcing rules

defective – adj. having a problem or fault that prevents something from working correctly : having a defect or flaw

understated – v. to say that (something) is smaller, less important, etc., than it really is

carbon dioxide – noun phrase Carbon dioxide (CO2) is a colorless, odorless gas, and it is the primary greenhouse gas emitted through human activities, according to the EPA

analyst – n. a person who studies or analyzes something

pollutant – n. a substance that makes land, water, air, etc., dirty and not safe or suitable to use : something that causes pollution

nitrogen oxide – noun phrase a mixture of gases composed of nitrogen and oxygen, given off by cars. It pollutes the air and causes acid rain, says GreenFacts.org.