UN Group Calls for Secure Financial Base to World Economy

Update Required To play the media you will need to either update your browser to a recent version or update your Flash plugin.
By VOA
08 October, 2015

The UN Conference on Trade and Development says recent financial unrest shows the need for new thinking about international trade and development. The conference, also known as UNCTAD, notes financial problems like the debt crisis in Greece, growing debt levels in other nations and stock market troubles in Asia. 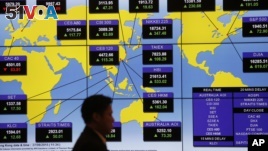 In a new report, UNCTAD is calling for reform of the International Monetary Fund to better meet the needs of developing countries. It also calls on nations to provide greater support for the IMF and development banks.

The report says countries should be able to pay for goods and services in their own currencies without having to use money from a third country. And pointing to the issue of debt, UNCTAD has called on international lenders to find better ways to restructure debt payments.

The report adds that many signs show the world has recovered in many ways from the financial crisis of 2007 and 2008. Employment is recovering, although not as quickly as needed. And leading measures of stock prices have recovered to their levels before 2008.

However, economic growth is slowing in both developed and developing countries. UNCTAD also points to debt as a continuing problem. It estimates that $57 trillion have been added to the world's debt since 2007.

A major idea in the UNCTAD report is its call for the development of a better world financial system with a more secure base. Steve MacFeely oversees development statistics and information for the organization. He spoke to reporters in Bangkok Monday.

"The image on the front of the report this year is a house of cards and that's really the key message that we want to convey -- is how to ensure that we're not building a house of cards for an international monetary and financial system for the future but to look at ways of maybe putting in more secure foundations."

In its report, UNCTAD criticizes major credit rating agencies, such as Fitch, Moody's and Standard & Poor's, for failing to predict financial crises. Mr. MacFeely says the agencies should either improve their models or "be removed from the system." He suggests they might be replaced by public, international groups.

UNCTAD itself has been criticized for tending to support government measures to support economies in crisis. This has been in opposition to the position put forward by many of the world's financial institutions. They often support giving more power to private businesses and expanding trade and markets.

This story is based on a report by VOA correspondent Steve Herman. Mario Ritter adapted it for Learning English. George Grow was the editor.

statistics – n. numbers that represent information related to how often something is done, cost or other information about people or things

convey – v. to make known to someone

tend – v. used to describe what often happens or what a person or group often does or is likely to do

currency – n. the money that a country uses; something used as money