Activists: Greece Not the Only Nation Facing Debt Crisis

Update Required To play the media you will need to either update your browser to a recent version or update your Flash plugin.
By VOA
26 July, 2015


The debt crisis in Greece has gained the world's attention. However, some activists say many other countries are building up dangerous levels of debt. They say private investors are lending money to those countries without enough rules or legal safeguards.

European officials avoided one financial crisis recently. Greece reached a deal with other European countries to meet its short-term loan obligations last week. The Greek government is expected begin negotiations on a three-year plan, valued at over $90 billion, to deal with its international debt.

Debt activists say there is the possibility of a debt crisis in other areas, especially in the developing world. Tim Jones is with a British group called the Jubilee Debt Campaign. It studies debt owed by countries around the world. This month, the group released a report called, "The new debt trap: How the response to the last global crisis has laid the ground for the next". 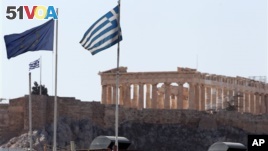 Greece reached an agreement with Europe on its debt. But debt campaigners say many developing countries are falling into a debt trap. (AP Photo/Thanassis Stavrakis)

Mr. Jones says an increase in lending to poor countries has become a problem.

"There's a huge boom in lending happening, especially in some of the most impoverished countries in the world at the moment. So we're worried that unless action is taken, they could end up in new debt crises again."

Mozambique is among the countries the report describes as facing a possible debt crisis.

"Its economy has been booming massively. It's had huge amounts of lending to the country, but actually poverty is increasing at the same time, and inequality is increasing. So the loans are not necessarily helping in tackling the problems of the country."

The Jubilee Debt Campaign says the total amount owed by debtor countries rose 30 percent, from 2011 to 2014, to $13.8 trillion. It predicts that amount will grow to $14.7 trillion dollars this year.

The group says 22 countries are currently in a debt crisis. Many more face a high risk of financial problems in their public or private sectors.

Judith Tyson is with the Overseas Development Institute, a public policy group based in London. She told VOA on Skype that the current debt problems are all tied to the financial crisis of late 2007 and 2008.

While the world financial crisis hurt many countries, some have struggled with debt for 20 years or more. Jamaica, Tim Jones says, is one example.

"If we take Jamaica, their debt crisis first began in the 1970s. And actually since the 1990s they've had huge government surpluses, but the debt has remained because the interest is just so high, and the economy has been depressed in the attempt to pay these debts. And it just shows you can't get out of a debt crisis by making cuts."

The Greek government made a similar argument during negotiations over its financial rescue plan. However, European countries, led by Germany, have called for continued spending cuts and reforms.

Greece reached a deal so that the country will stay in the Eurozone, the group of nations that use the euro as their currency. But for developing nations, Tim Jones says, there is additional risk when a nation's currency loses value compared to other currencies because of high debt.

"The debts are all owed in foreign currencies, like the dollar or the euro. And so when a country has a currency devaluation, then the debt payments shoot up."

So as debt grows, so do the risks.

Debt campaigners are calling for tighter controls of international lending and cancelling some loans for countries already in crisis.

Henry Ridgwell reported on this story for VOANews.com. Mario Ritter adapted it for Learning English. George Grow was the editor.

obligation(s) – n. something that is required to be done by rule, law or expectation

sector(s) – n. a different part of a larger whole;

currency – n. money as a form of exchange

devaluation – n. the loss in value of one kind of money compared to other currencies either because of a crisis or by government policy