Is There a ‘Skills Gap’ in US Job Market?

Update Required To play the media you will need to either update your browser to a recent version or update your Flash plugin.
By VOA
30 June, 2015


The United States' job market has millions of unfilled jobs. Many of those jobs require technical skills. However, employers say many of those jobs are vacant because they cannot find people with the right skills to do the work. Labor experts call this paradox the "skills gap." A number of efforts have been launched to better understand and solve it.

Nicholas Wyman wrote a book called, "Job U: How to Find Wealth and Success by Developing the Skills Companies Actually Need." He calls the skills gap, "a labor market mismatch -- people without jobs and jobs without people."

In the United States, the cost of a traditional four-year college can be very high. U.S. colleges and universities produce many graduates every year. Yet unemployment rates among new graduates are high.

Nicholas Wyman says a combination of technical classes and on-the-job training -- an apprenticeship --would be a better choice for many people. He notes that, "An apprenticeship is where you learn from a specialist, you are provided mentoring, you learn in an on the job environment, the old cliche is that you are actually paid to earn and learn." 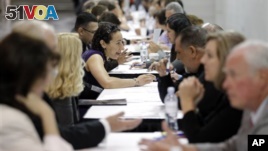 People have their resumes reviewed at a job fair. Some experts say there is a "skills gap" between jobseekers and jobs. Some researchers however say evidence of a skills gap is weak.

Mr. Wyman also says it is vital to get technical skills that are of immediate value to an employer. He adds that it is important to get transferrable skills -- those that can be used in more than one job. This is because technology and the nature of the workplace are changing at a faster rate than before.

There are questions about the definition, size, and nature of the skills gap in the labor force. Iowa State University researchers studied some of these questions recently. They examined employment, education and population information, and found the evidence of a skills gap is weak.

Iowa State's Liesl Eathington noted that many policymakers and employers say there is opportunity in "middle skills" areas, like machining. Yet she said the most recent recession hit some of those job areas hard. She said students should be on guard because "our economy really isn't adding that many jobs that require the middle skills or middle educated territory."

She said employers could get more well-qualified applicants if they offered higher wages. She noted that graduates of two-year training programs still generally make less money than graduates of four-year colleges.

The question of finding the right person for the right job remains a difficult one. The Department of Labor says 8.7 million Americans are unemployed and another 6.7 million can find only part-time work.

VOA's Jim Randle reported on this story. Mario Ritter adapted it for Learning English. George Grow was the editor.

vacant – adj. not occupied, open to being filled

paradox – n. a problem involving two issues or conditions that appear to oppose or compete against each other

apprenticeship – n. a job in which someone works with a more experienced person in a field and learns skills from that person