Update Required To play the media you will need to either update your browser to a recent version or update your Flash plugin.
By VOA
29 June, 2015


It increasingly appears there will not be an agreement with Iran to limit its nuclear activities -- at least not by June 30.

On Monday, U.S. Secretary of State John Kerry met in Vienna with the head of the International Atomic Energy Agency, Yukiya Amano. Their talks came a day before the deadline that negotiators had set to reach a nuclear deal.

As he prepared to meet with Mr. Amano, Mr. Kerry said "we are just working and it is too early to make any judgments."

Iranian Foreign Minister Mohammad Javad Zarif was not at the talks. He returned to Iran late Sunday. But he is expected to return to Vienna on Tuesday. 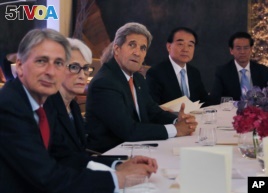 On Sunday, officials from Iran, the U.S. and Europe said the negotiations were likely to continue past the deadline.

Banks and money machines are closed Monday in Greece. The country has ordered its banks and stock market closed for six days.

Prime Minister Alexis Tsipras announced the moves on Sunday. His announcement came hours after the European Central Bank said it would not continue an emergency loan program. That program had given Greek banks enough money so they could stay open.

Experts say Greece likely will be unable to make a payment on its $1.8 billion loan from the International Monetary Fund. The payment is required on Tuesday.

The banks and the stock market will likely stay closed until July 5. That is when Greek voters will decide whether to accept new economic reform measures. The country's creditors are demanding the reforms. The Greek government is urging voters to say no to the demand unless the lenders agree to changes.

Officials from 57 countries gathered in Beijing on Monday to sign an agreement creating the Asian Infrastructure Investment Bank.

Australia was the first nation to sign the agreement.

The bank was created to help Asia meet the need for $800 billion a year to build roads, railroads and ports. It will also have money for telecommunications, energy and electricity projects.

China is giving the bank almost $30 billion. The bank will begin operations with about $100 billion. China will control more than 25 percent of the votes in the bank. India and Russia are the second- and third-largest shareholders.

The United States and Japan have refused to join the bank. They are worried about its rules. The U.S. asked many of its allies in Africa, Europe and South America not to join the bank, but most of them did.

The founder of Space X says his company has launched a full investigation of a rocket that exploded on Sunday. Elon Musk said there was too much pressure in a liquid oxygen tank on the rocket. He said his company is investigating the reason for the over-pressurization.

The rocket exploded just minutes after it was launched from Cape Canaveral in the U.S. state of Florida.

There were no people on the 63-meter-long rocket. It was carrying almost 2,500 kilograms of food, clothing, equipment and science experiments for the astronauts on the International Space Station.

One of the two men who escaped from a high-security prison in New York State is now in a hospital. David Sweat was shot when police captured him on Sunday. A hospital official said he is in critical condition.

Hundreds of police officers had searched for David Sweat for 23 days after he escaped. He was captured in a town about 30 kilometers from the prison and three kilometers from the Canadian border. A second man who escaped with him, Richard Matt, was shot and killed Friday.

Sweat killed a sheriff's deputy in 2002. He had been sentenced to life in prison without the possibility of ever being released.

Investigators believe at least two prison employees helped the men escape. The two have been arrested.