Update Required To play the media you will need to either update your browser to a recent version or update your Flash plugin.
By VOA
26 June, 2015 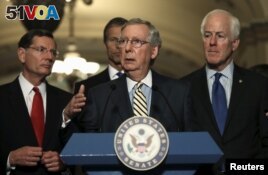 "Is any member wishing to change their vote? On this vote, the ayes are 60, and the nays are 38. The motion to concur in the House amendment to the Senate amendment HR 2146 is agreed to."

The bill's approval increases chances for two of the biggest trade deals in U.S. history. Under TPA, the Trans-Pacific Partnership and the Transatlantic Trade and Investment Partnership would be approved with simple-majority votes in Congress. Lawmakers could not amend the agreements.

The House of Representatives has already approved the TPA bill. President Obama is expected to sign it into law.

Two weeks ago, TPA's supporters feared the bill would not get congressional approval. House members blocked trade legislation by voting down a re-training bill for American workers displaced by foreign competition. House Democratic Leader Nancy Pelosi announced on Wednesday she would vote for the measure. She had led House Democrats in opposing it earlier this month. She spoke after the Senate was prepared to support the retraining legislation.

The sudden increase in support for free trade saddened its opponents, like Independent Senator Bernie Sanders. "It's a great day for the big-money interests, not a great day for working families," he said. Mr. Sanders added, "This trade agreement will continue the policies that have cost us millions of decent-paying jobs."

Environmental groups and labor unions also oppose "fast track" authority. Jim Hoffa heads the Teamsters Union, which represents American truck drivers. He said that "History shows it makes no sense to give a quick up-or-down vote to bad trade deals like the TPP that will only ship jobs overseas and lower wages in the U.S."

The trade battle produced rare, political alliances in Washington. On this issue, President Obama has had strong support from Republican congressional leaders. Yet the Republican leaders work against the president's proposals on almost every other issue. TPA sharply divided Democratic lawmakers. They were the targets of serious lobbying efforts from activists on both sides.

VOA's Michael Bowman reported on this story from Washington. George Grow adapted it for Learning English. Mario Ritter was the editor.

concur – v. to agree with someone or something